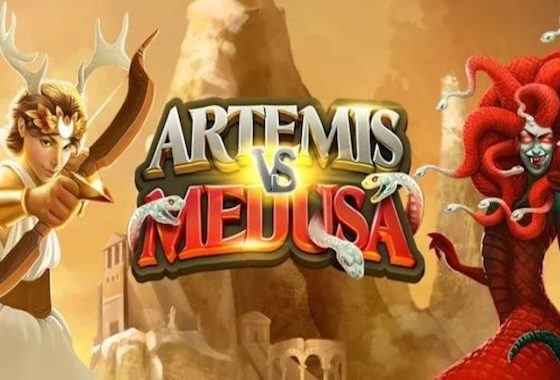 If 3 scatters appear on the reels, you will activate free spins. The battlefield above the reels activates and Artemis stands at the one end, ready to face the beasts advancing from the other, and a meter that tracks the progress of the battle appears below it. When Artemis symbol appears on the reels, the monster symbols in view will be collected and added to the meter making them advance on Artemis on the battlefield. Each Artemis symbol that lands will remove one monster from the meter, in ascending order, and a reward will be paid out each time. If the meter exceeds 15 symbols or Artemis slays all the beasts, the free spins will end.

Artemis vs. Medusa creates a memorable, exhilarating experience through unique gameplay and enriching rewards. The game's look and feel comprise richly detailed, bright graphics and fluid animations that bring the characters to life, backed up by epic battle music. The base game pays out decent amounts thanks to the Monster Bounty Coins, but it is essentially just a precursor to the free spins battle mode which is quite exciting to behold as Artemis wields your luck to strike down the beasts advancing upon her. As an experience, this title delivers excitement and enjoyment, particularly if you are into Greek mythology and the winning potential just adds to its engaging nature. Traditionalists may balk at the idea of having a battlefield perched above the reels, but anyone up for a new experience should check this out.