BlogRetro Revival: Why The Classics Are Still Winning Over Canadian Gamers

Retro video gaming undoubtedly means different things to different people, depending on your age. However, if the mention of Tetris on a Gameboy or throwing barrels with Donkey Kong on the SNES conjures up images of your 1990s childhood, you’re very much our target audience for this feature. Since the late 1980s and early 1990s, video game consoles have been a staple in family living rooms across the globe.

It doesn’t matter whether you had a penchant for Super Mario, Sonic the Hedgehog, Pacman or Ryu from Street Fighter, you’ll all be able to hark back to that feeling of belonging and being part of a journey when playing your favourite retro video games. In the post-Millennium era, the raft of technological advancements in the world of video gaming and the appetite for more immersive gaming among consumers has seen more companies invest in the development of next-generation consoles to try and take a slice of the industry’s pie.

Nevertheless, despite the bells and whistles of today’s high-definition video games, often complete with augmented and virtual reality, gamers are increasingly looking over their collective shoulder and becoming nostalgic about their video gaming; harking back to the days of less than 16-bit visuals and audio capabilities.

The Retro Games Consoles Making a Comeback – and Why

In the fall of 2016, Japanese video gaming giants Nintendo took the decision to relaunch one of its most successful retro games consoles. The NES Classic Edition – also known as the Family Computer in Japan – reached our shelves in November, producing and selling well over 2.3 million units until April 2017, when shipments soon began selling out.

Such was the success of the NES Classic that Nintendo opted to discontinue it and focus its efforts on relaunching its old-school console successor, the Super NES Classic Edition – also known as the Super Famicom in Japan. Featuring much of the same hardware as the former NES Classic Edition, the Super NES Classic Edition also had an HDMI display output for crystal-clear visuals on today’s biggest and best high-definition screens. Not only that, the console came with 21 of the leading retro Super NES titles pre-installed, such as Star Fox, Super Mario Kart and Donkey Kong Country. The end result? By the end of January 2018, Nintendo had shifted some 5.28 million units when production was halted.

At the time of the SNES Classic’s release, Nintendo insisted that it remained focused largely on “delivering great games for the Nintendo Switch system”, which is its latest console/mobile hybrid product. Nevertheless, Nintendo has seemingly found it impossible to ignore the “fans who show tremendous interest” in the company’s “classic content”. 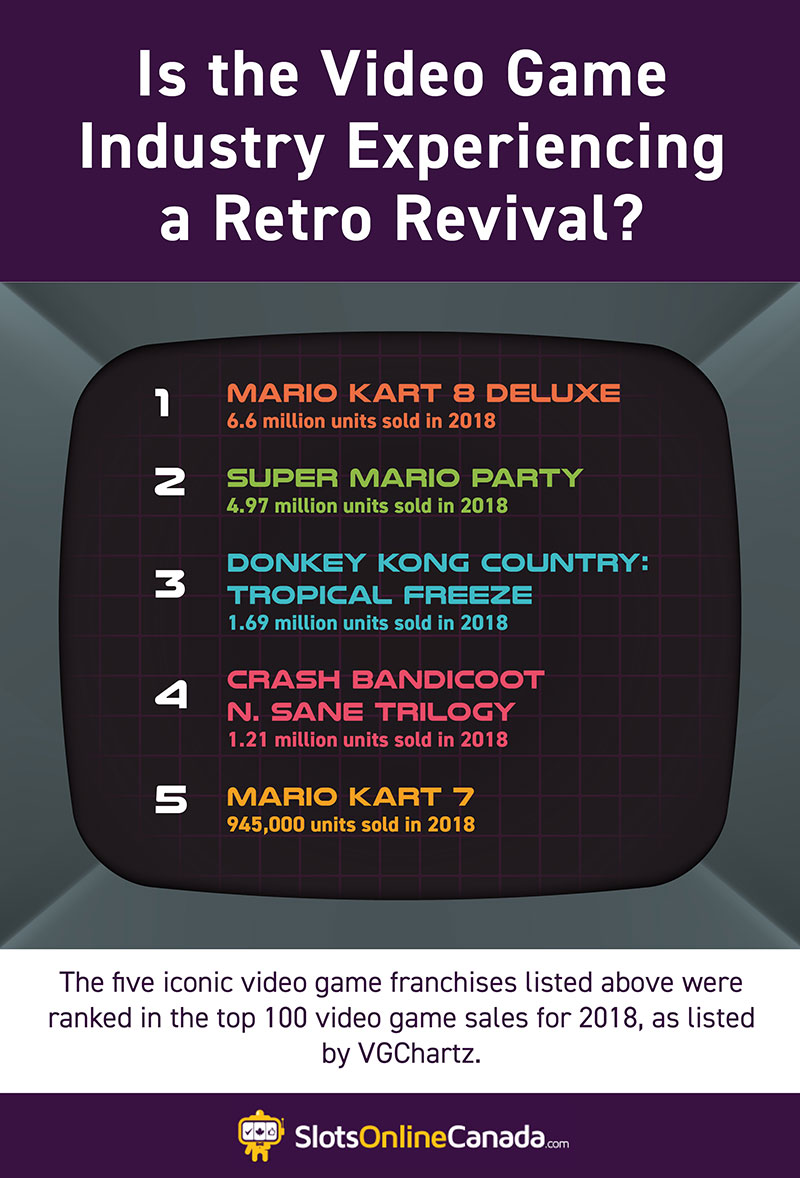 Nintendo’s fierce rival in the games console market in the 1990s was Sega, with the Genesis going head-to-head with the SNES in terms of popularity. Sega has also recently sought to bring its retro video games back to life, relaunching its entire library of video games on an on-demand platform for mobile gamers. The so-called Sega Forever portal re-releases a host of retro Sega titles every other week, including much-loved titles such as the original Sonic the Hedgehog game, Kid Chameleon and Altered Beast.

It’s a big step forward for fans of retro gaming that had been forced to make do with emulated game ROMs playable on desktop PCs. Nevertheless, there are several issues with retro emulators, not least the fact that they were wholly illegal, but they were riddled with bugs and viruses too. The return of the SNES and Sega’s Genesis games on a more legitimate level is good news for the safety and security of retro gamers.

Psychological studies have suggested that millennial video gamers are increasingly nostalgic when it comes to retro video gaming because it allows them to reconnect with their past, including their friends and loved ones. Nostalgia itself has several benefits psychologically. Primarily, it can help people feel better about themselves and feel less alone, potentially batting back the onset of dementia symptoms. It’s clear that retro video games are increasingly viewed as a comfort blanket for when times get tough.

Classic Video Game Franchises That Continue to Be Loved

With our usual focus on online slots, we recently decided to conduct a survey of Canadian video gamers, to get an understanding of their attitudes and habits towards retro video gaming. A quarter (25%) of all respondents stated that they had previously owned an original NES or Super NES, with more than 10% of respondents planning on getting the rebooted NES Classic or Super NES Classic. 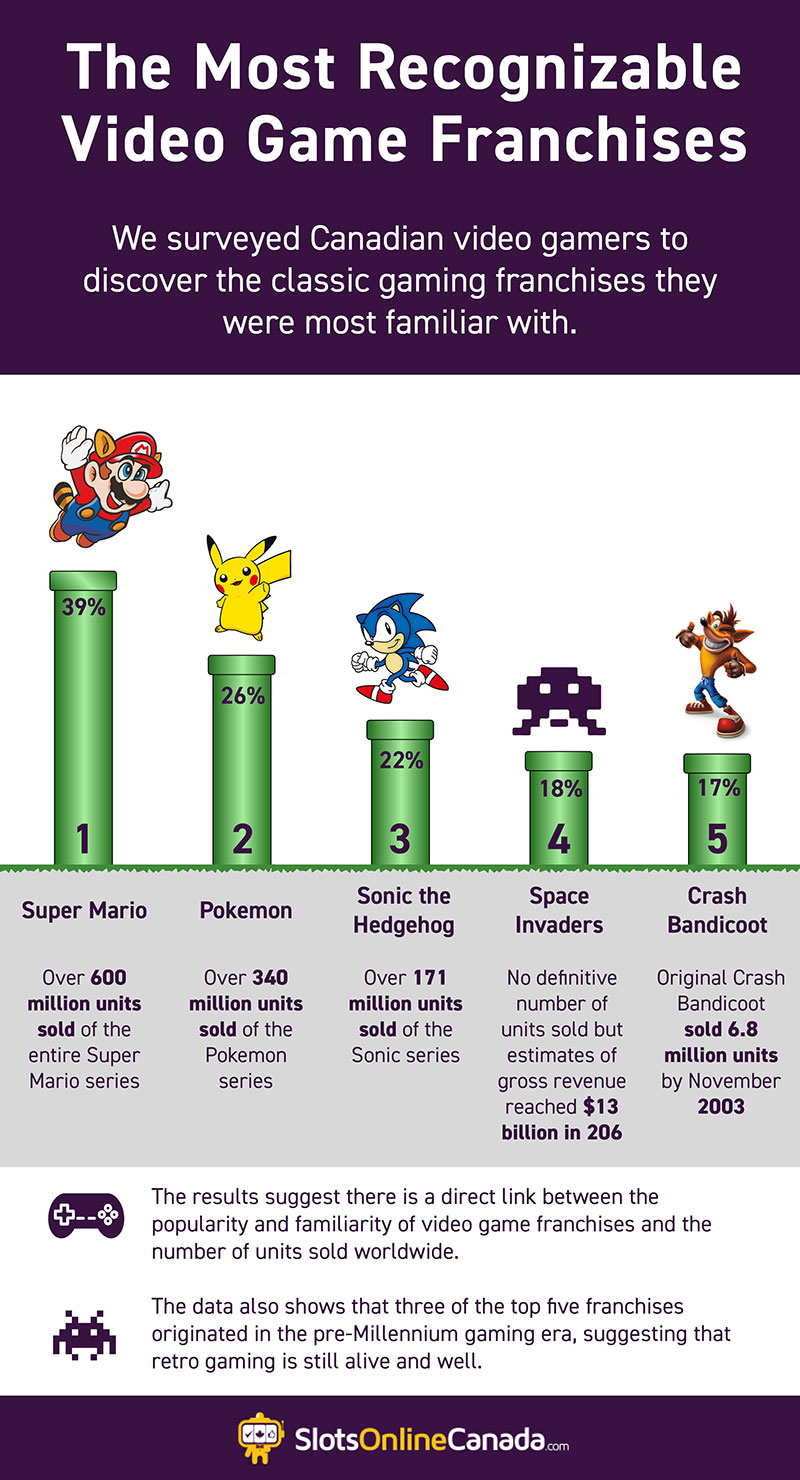 Looking back at the global video game sales of 2018, two of the top ten releases were from the Super Mario franchise. Mario Kart 8 Deluxe and Super Mario Party were released on the Nintendo Switch, shifting 6.68 million and 4.97 million units worldwide respectively. Mario Kart 8 Deluxe is a souped-up version of Mario Kart 8 from the Nintendo Wii. Visually, this reboot is a hugely impressive addition to the Nintendo Switch portfolio. Its nod to nostalgia sees a range of Super Mario’s friends and other Nintendo-related video game characters included for selection, including the crew from Splatoon.

As for Super Mario Party, it’s great to see Nintendo breathe new life into the Super Mario fan-favorite board game-style action, which offers up to 80 different mini-games to play on your own or with others on the Switch. Super Mario Party is now playable anywhere with anyone else that owns a Switch controller, thanks to the system’s local wireless connectivity function. It’s yet another way that Nintendo brilliantly manages to keep retro gaming part of the future.

A quick glance back at that list of top ten video games sold in 2018 shows another iconic video game franchise from years gone by. Super Smash Bros. was another hugely popular release onto the Nintendo Switch, with almost nine million people flocking to buy this brilliantly bombastic reboot. Super Smash Bros. has long been an important part of Nintendo’s portfolio of games, as it has kept alive multiple Nintendo beat’em up franchises within a single release. Acting as a “crossover” fighting game, players can take control of all kinds of Nintendo characters, including those from games such as The Legend of Zelda, Metroid and Star Fox. So popular has the multiplayer features of Super Smash Bros. become that it has helped foster a community of players that compete against one another online.

It seems that no matter how complex or immersive next-generation video gaming becomes, there will always be a place for fun, intuitive retro titles in the hearts of gamers.

Why the Seasons Are So Important in the World of Entertainment

Sport and Canada in the 21st Century: How Canadians Became Gluttons for Sport