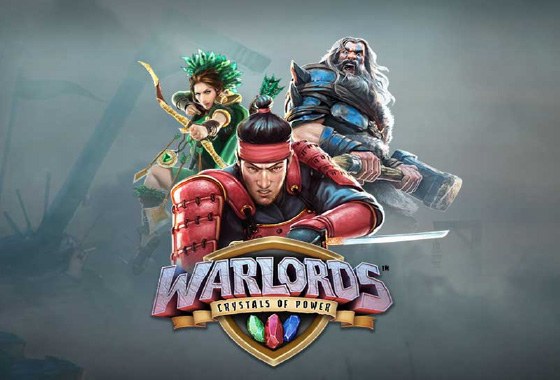 Three warlords The Barbarian, The Priestess and The Samurai are on a quest for the crystal of power. They appear as stacked symbols alongside their respective pets a wolf, a panther and a wild boar on regular symbols. Their three masks make up the lower valued symbols.

A selection of gems in a gold inlay is the wild symbol for the game. The wild replaces all other icons barring the scatter icons, which are made up of the red, blue and green banners of the Warlords. Scatter icons only appear on reels two, three and four.

Upon landing at least two scatter symbols a battle sequence ensues resulting in the scatter banners turning the same colour. Once all the banners match, a Re-spin phase occurs in which a single spin is granted to possibly reveal more scatters. At least three matching scatters are required to trigger the Free Spins phase.

The Free Spins feature differs depending on the colour of the three scatters;

This feature occurs at random during the base game and rewards players as follows:

NetEnt enthrals with this hugely entertaining fantasy battle game. The graphics are nothing short of mesmerizing and the action is sure to keep players glued to their seats for hours, much like the prequel Secret of the Stones Slot did. The game is highly lucrative to boot as the bonus features are triggered regularly, awarding a top prize of over 6666 times your original wager!