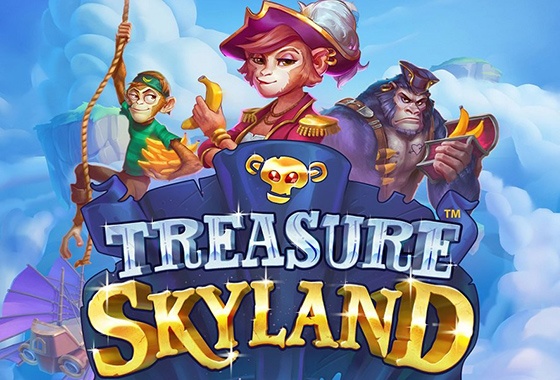 The reels are opaque and feature the quirkily illustrated monkey crew as well as other symbols.  You will have a hefty arsenal of special features for this epic journey by way of the Feature Reel bonus round built onto the reel structure. Treasure Skyland can be played with bets ranging from 0.10 to 100.00 and is available across all devices.

Treasure Skyland holds at its core a very good concept for an online slot game. The roaming feature frame gives the game a distinctive visual feel and the feature reel can seriously boost your bankroll, including the top prize of 1000x your stake. The theme is nothing you've ever seen before, although the graphics do feel a bit rudimentary, compared to previous offerings from Microgaming.

The main drawback of this slot is that the base game can be a barren experience, you may find yourself spinning for lengthy periods, hoping that the feature frame will successfully land on your winning combination and this can get quite frustrating. This high-volatility title has an RTP of 96.18% which is decent, but which would have worked better with a higher overall winning potential. At times, the maximum prize of 1000x your stake doesn't quite feel worth the effort it takes to get there.

For the theme alone, Treasure Skyland is worth a look, and perhaps you will fall into the niche of players who will enjoy this particular combination of features and mechanics.