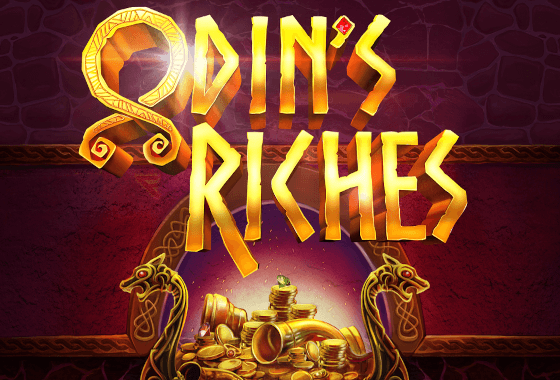 The game’s rolling reels mechanic has additional payoffs aside from removing winning combinations, for new symbols to appear on the reels, potentially creating chains of wins. After every win, a wild symbol will be generated and the horn-shaped meter to the left of the grid will fill up slightly. For every 25 symbols involved in winning combinations, one segment of the meter will fill up and one of four random mini-features will be triggered. The Dragon’s Riches feature makes 5 of the same symbol into a winning combination, regardless of their position. Wolf’s Hunger removes all low-value symbols from the grid and Serpent’s Wisdom upgrades all lower-value symbols to a higher paying one. Raven’s Flight has Odin’s two ravens fly diagonally across the grid, removing the symbols they touch and placing 3-5 wilds on the reels.

This base game-only feature activates randomly, placing 4 to 9 wilds on the reels.

Odin’s Riches slot offers a thrilling combination of features with a compellingly woven theme. The game adopts a simple, high-impact visual theme with highly detailed symbols and game elements that combine with the rising, ominous soundtrack to create a charged atmosphere. Getting to the bonus features by filling the win meter gives the gameplay a compelling edge and you’ll have to stack a few mini features up on the meter to claim the slot’s top prize of $250 000. While this isn’t a high-roller’s dream by any means, the uniquely constructed gameplay is all the reason you need to give this title a shot.