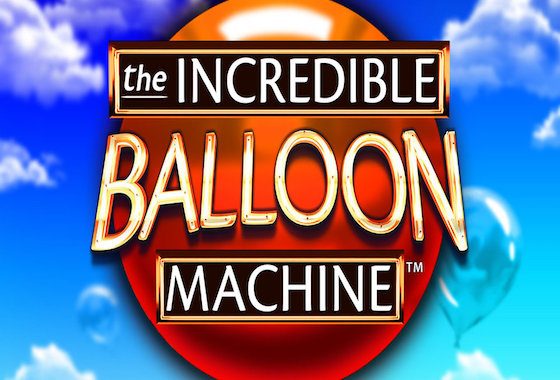 Multipliers At any point during the base game, light bulbs with multiplier values ranging from 2x to 10x will appear on either side of the balloon. Once you have inflated and released your balloon, the bulbs flash, eventfully settling on a multiplier value, which is applied to your win.

Pick bonus At random times during the game a golden or black balloon will float before you. It will either pop or blow up to full size and activate the bonus game. Rounds of balloons will appear on screen of which you must choose one at a time. When chosen they will either reveal cash prizes or a 2x multiplier that is applied to the total amount won. Certain balloons contain either 'advance' or 'complete' symbols that will give you a new round of balloons to pop or bring the bonus feature to an end.

Judging the Incredible Balloon Machine slot game is a challenge as there isn't much you can compare it to. The appeal of this slot is that it is very much unlike any other game. Its unique mechanics and unusual combination of features make it an intriguing prospect. As far as the potential to walk away with decent winnings, the game's RTP sits at 96.75% and has medium volatility, giving you a fair enough shot at the 3,082x your bet maximum prize, but this may involve a lot of inflating, which can get tedious.

The gameplay may deceive you into thinking that some strategy can be formed to maximise your winning potential, but there is no way to predict how soon the balloon you are inflating may burst, or what its assigned value is, so you are as much at the mercy of luck as you are with more traditional slot titles. The multiplier and pick bonus features do work well with the concept of the slot which has an interesting look to it but may be too minimalistic if you are more into slots with a more detailed visual theme. If you are the type of player who loves quirky, unique niche slots, then The Incredible Balloon Machine might just be your new favourite. This is why we rate it 4 Stars!