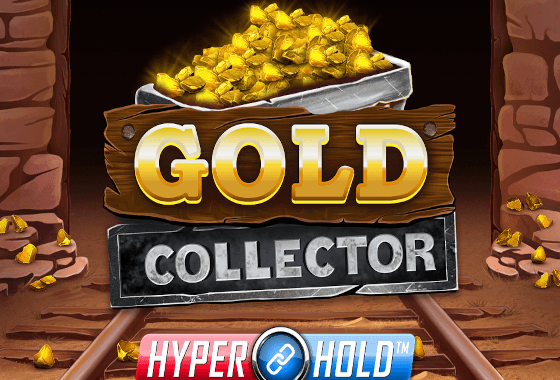 When 3 or more coin symbols with random values attached to them appear on the reels the HyperHold feature will activate. The triggering symbols will become sticky and you will be awarded 3 respins. Any new coins that appear on the active reels will retrigger the feature and you will start over with 3 respins. The feature will end when all the available positions are filled or when you run out of respins. Each reel has a fixed jackpot attached to it and filling up the reel with coin symbols will award you the corresponding amount. If you fill up reels 1, 2, 3, 4, or5, you will receive 10x, 20x, 50x, 100x, or 1000x your stake respectively.

If you land 3 scatters on reels 2, 3, and 4, you will receive 8 free spins. You can retrigger the feature with 3 more scatters and it is possible to activate HyperHold while the feature is active.

Gold Collector slot, unfortunately, fails to ascend beyond mediocrity and may only appeal to undemanding players. The game’s visuals are in an appealing cartoon style with minimal animations. Claiming the game’s top prize of $120,000 requires the HyperHold feature which activates fairly regularly. Ultimately, this title pales in comparison to other HyperHold titles and makes poor use of the feature, limiting your maximum winning potential to an unimpressive amount.

The free spins mode also fails to excite with no additional sub-features or boosted winning potential in sight. New players dipping their toes into the world of slots may appreciate this basic approach, but Gold Collector is unlikely to build a fanbase of any significance