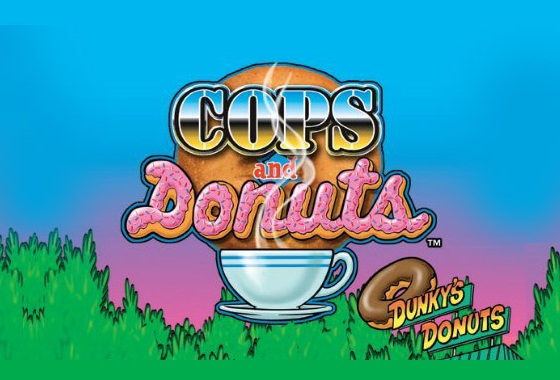 You will be able to choose 3-4 options from a list of laughable excuses to explain why you were speeding and claim a random multiplier prize, an instant cash prize, or the chance to pick another excuse from each of your selections. If the cop presents you with a box full of donuts at the end of the round, all your winnings from the feature will be doubled.

If 3 Donut symbols land on the first 3 reels, you will be transported to a donut shop where a portly officer stands alongside a display case full of delicious confectionaries. You will be assigned a random number of trays you can pick and then you will have to select them from the trays in the display case.

Each time you select a tray, the cop will consume all the donuts and a win value will be displayed, the combined value of all the trays of donuts consumed will be added to your winnings at the end of the round.

While Cops and Donuts slot may feel dated, its charm and wackiness back up some exciting gameplay and great potential. The theme of the slot is unconventional and packed full of humour with animated sequences featuring hilarious voice acting permeating the entire game. The two bonus features are entertaining and lucrative which comes in handy if you’re aiming to win the slot's top prize of $1.25 million. Putting aside the fact that this title looks like an early 00’s cereal commercial, the impressive potential and engaging gameplay guarantee it will stand the test of time.