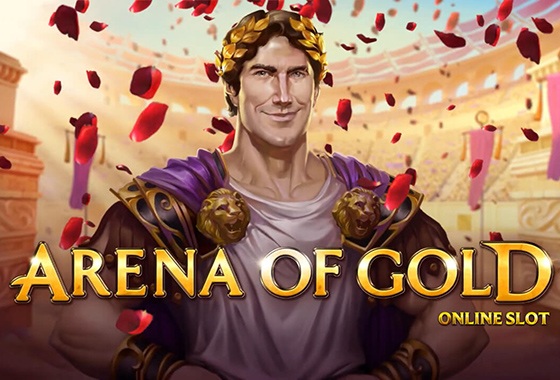 The glory of a Roman coliseum forms the background. The stone-hewn arena with its fluttering banners cements the theme nicely. The bonus features are variations of a well-known game mechanic, free spins and golden respins will pave your road to glorious victory and your minimum and maximum allowed bets are 0.10 and 50.00 in this slot that is playable across all devices.

Arena of Gold slot is a triumph in simplicity and offers a pleasing variety of ways to win. The overall visual effect is very well-detailed and captivating with the background being just as detailed as the symbols themselves. The 96.2% RTP right-on average, giving you regular wins during the base game. The golden respins offer exciting potential and this bonus feature is slightly more lucrative than the free spins, offering a potential maximum 2500x your stake if you land the right combination of coin multipliers. The gameplay might be simple, but this title does well to expand on the potential of well-known bonus features. Arena of Gold is a slot that most will enjoy; it manages to distinguish itself from the mass of other ancient Rome-themed titles with a seemingly effortless combination of solid gameplay and winning possibilities.