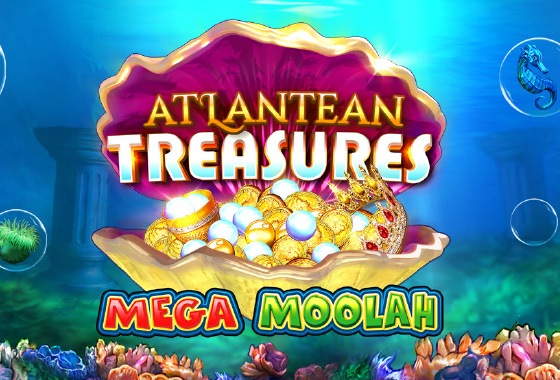 The symbols are similarly underwater-themed with a magical touch, and the four progressive jackpots available are set to the left of the reels, above a glowing, golden clam. You can expect expanding wilds, respins and a progressive jackpot wheel which holds the sought-after Mega Moolah network jackpots. You can wager anything from 0.10 to 200.00 and you will be able to play this title across all devices.

A seahorse, sea star, pink and purple fish and seaweed are the lower-value symbols here.

A bar symbol and lucky 7 make up the higher value symbols.

A pink-haired mermaid acts as the wild symbol and stands in for all regular symbols.

Expanding Wilds/Respins Landing the mermaid wild on reels 2, 3 or 4, causes this symbol to expand and fill up the entire reel. This will simultaneously activate a respin, locking the wild in place and allowing the rest of the reels to spin for potential winning combos. Respins can be re-triggered up to 3 times.

Atlantean treasures: Mega Moolah slot won't necessarily impress you with its base game. There is a respectable 500x your stake to be had if you can fill the middle slots with wilds and the outer slots with high-paying symbols. While that might be enough for some, you are likely to choose this slot for your chance at a minimum of $1 million for the Mega progressive jackpot prize. Microgaming certainly could have put more effort into the parts of the game that don't include the progressive jackpots, but it is doubtful that anyone will complain about the comparatively small base prizes or the low RTP of 92.08%, which is typical for progressive jackpot slots.