Stockholm-based iGaming provider Play‘n GO has revived one of America’s most iconic rock bands from the 1970s for its new online slot title, KISS: Reels of Rock.

The game transports you into the realm of the world-famous rock quartet to experience what Play’n GO describes as a ‘concert of a lifetime’. The developer shared that the title explodes with colour with the reels housed in a unique diamond shape. Symbols bearing the likenesses of the band members Gene ‘The Demon’ Simmons, Ace ‘The Spaceman’ Frehley, Paul ‘The Starchild’ Stanley, and Peter ‘The Catman’ Criss appear on the reels with platinum record wilds and aeroplane-shaped scatters.

This is far from Play‘n GO’s first foray into the world of rock ‘n’ roll with the company having released slots tied to classic musical acts like Annihilator, Saxon and Twisted Sister.

The supplier stated that its latest music-infused title offers a top potential reward of 50 000x your stake and that you can count on wilds, multipliers, and free spins to get you there, accompanied by spectacular stage antics and seven of the band’s smash hits including Detroit Rock City. The 576 payline slot offers an RTP of 94.2% and a betting range of $0.10 to $100.00.

The game immerses you in a live rock concert environment with the bandmates sporting their signature facepaint and outrageous outfits and hair. Land three scatters to choose from five feature options that display the concert locations of Johannesburg, London, Sydney, Rio De Janeiro, and Tokyo. You could also trigger the coveted New York-themed Encore Spins feature where an expanding grid generates up to 4096 ways to win.

Charlotte Miliziano, the Head of Games for Play‘n GO spoke about the new game in an official press release, saying that even players who have never heard of Kiss would find it hard to resist the infectious energy that the game radiates.

She added that the slot ‘embodies the environment, look and feel of a real-life concert,’ thanks to elements like synched pyrotechnic animations that create a thrilling experience.

“We’ve loved working on the innovations within this game. The way the lighting animations react to the audio makes this such an immersive experience for the player as it feels like they’re actually at the gig. Getting the animations to react to the audio within the game has been a real achievement and we haven’t seen it that much in the industry, so far.” 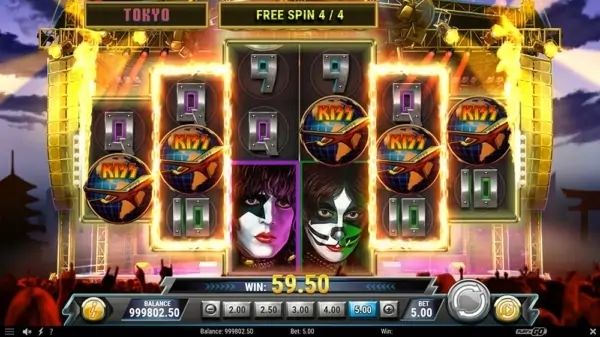