NewsPlay’n GO Releases Alice Cooper And The Tome Of Madness

Alice Cooper and the Tome of Madness is Play’n GO’s new rocking slot release. This title takes you on a journey across parallel universes with Alice Cooper, the godfather of shock rock on a 5x5 reel, cluster pay format.  This high volatility game has a rewarding top potential of 3000x your stake and an above-average RTP of 96.20%.

The slot has been infused with the rocker’s trademark aesthetic and includes a song from his 1975 release "Welcome to My Nightmare" as the game’s soundtrack.

Alice Cooper is bound in chains to the right of the reels and your objective is to free him from his bonds. Cluster wins are achieved when you land four or more connected symbols and the winning symbols are removed from the grid, allowing new symbols to appear in their place.

The Temptation Room places a wild on the reels and transforms random symbols into the same symbol.

Freeing Alice requires special key symbols that leave a wild behind as they are collected. If 3 key symbols land on a single spin, the chains are released and the stacked Alice Cooper Mega Wild will appear on the reels. This special symbol will land on reel two, three, or four and will ‘walk’ one reel to the left or right until it leaves the grid.

Each winning cluster charges the Hat of Madness meter that will award you with extra wilds or Reality Spins.

Collect at least 50 winning symbols to be presented with Four Reality Spins options that transport you to vibrant realities. Choose from the Insane Asylum, the Dungeon, the Chamber of Horrors, or the Temptation Room to see the star of the show in his various, spectacular guises. The environment’s corresponding Reality Effect will be triggered once the feature ends.

“It was so exciting entering the theatrical and macabre world of Alice Cooper. We got to take elements of horror, vaudeville, and garage rock to create these epic worlds that Alice finds himself trapped in. We’re excited to continue expanding our ever-growing IP game portfolio and work with epic artists as they form the basis for great games that players adore.”

Alice Cooper and the Tome of Madness is available to play now at all Play’n Go casinos. 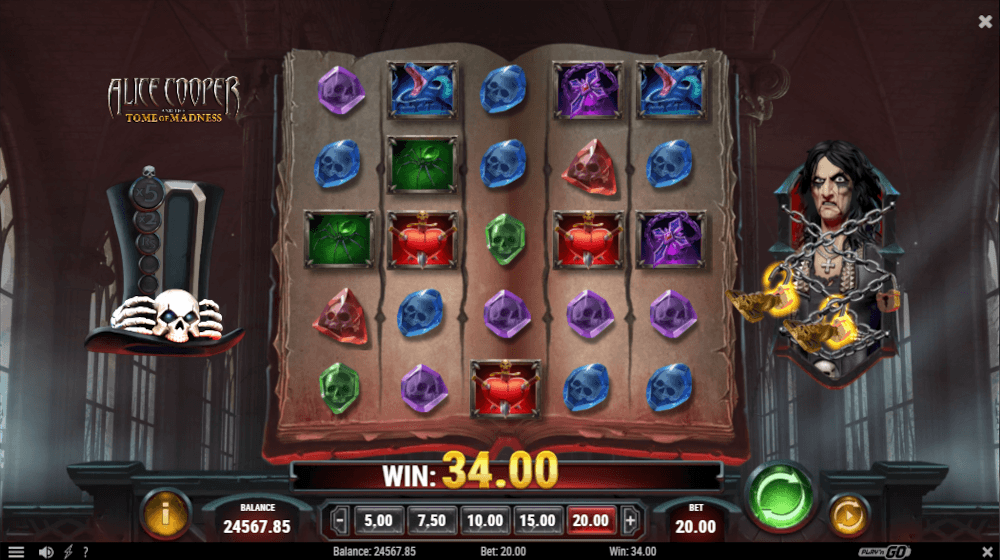