You will often hear casino players talk about the “long run.” They might repeat the common phrase that “the casino always wins in the long run.” Talking about what happens over a very long period also lets someone calculate the house edge or return to the player (RTP) for a given game. We think we have a good idea of what to expect when someone plays a casino game for an extended time.

However, people rarely specify precisely how long they mean. In any given session, someone’s wins or losses can vary dramatically from what the RTP would suggest. This variance leads to a natural question: what does the long run look like in slots?

Slots are a Volatile Game

We might expect the long run in slots to be interesting because slots are more volatile than most casino games. They have huge jackpots (even if they only pay out 1 in 100,000 spins) and a wide range of possible payouts. Compare this to games like blackjack and baccarat that typically pay 1 to 1 or 1.5 to 1 at best. Most bets in craps also return 1 to 1, though some are 2 to 1 or 3 to 1. In contrast, slots can pay 100 times the bet, or even more. Because of this, the long run is going to look very different in slots than it does for other games.

Find a Slot to Simulate

The best way to see what the long run looks like is to replicate a real slot through simulation. If we knew what each possible payout was and the chance that it would occur, we could use a computer program to replicate a session at the machine. The problem is that most slots are proprietary, and they will not tell you this information.

Fortunately, a few professors, Ashok Singh, Anthony Lucas, and others, were able to find an actual slot paytable and publish that table in a few journal articles. They make a couple of adjustments to the volatility and house edge for the comparisons in their work—I picked the one in the third column of their article here.

his chosen slot has a couple of metrics that we can look at:

The 94% RTP is reasonably competitive with slots that you can find today. The variance is moderate because of the mid-sized jackpot. This jackpot also means that the win frequency and hit frequency are lower. It looks like there are a few losses disguised as wins because the hit frequency is slightly higher than the win frequency. These features are similar to some real slots that we may expect to see in a casino or online.

As mentioned before, the long run means something different to everyone. But one starting point is to picture a long weekend in Vegas playing slots. This might be a total of 20 hours of slot play across 4-5 days. We can use an estimate of 600 spins per hour to assume that the 20 hours would translate into roughly 12,000 spins (that’s a long time to play the same slot, but stay with me for the sake of example).

When people bring up the long term, they often imply that everyone’s winnings start to look the same after a while. So if 100,000 people played these 12,000 spins on the same slot, we would expect that their total winnings would be similar. Of course, each pull will be different, but throughout many spins, the hypothesis is that the ups and downs eventually even themselves out.

To put this to the test, I used a computer program to simulate this exact scenario: 100,000 people playing about ~20 hours each on this slot. That 2 million hours of playtime only takes about 10 seconds to replicate, and we can take a look at each person’s total winnings, subtracting out the money they fed into the machine. 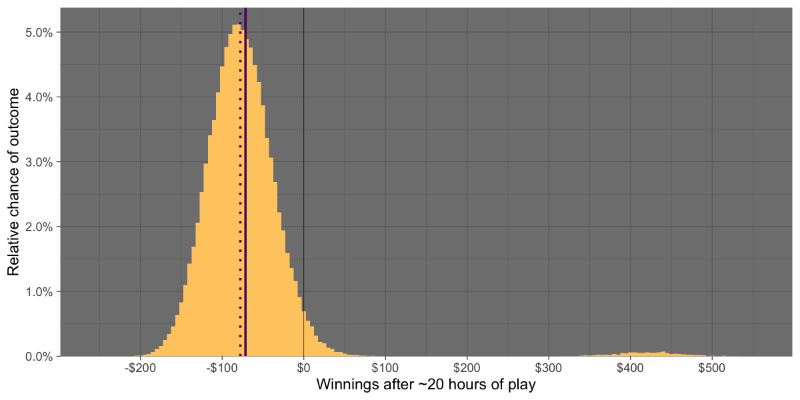 What’s interesting about this graphic?

What do you think would happen if we instead simulated 5 of these long weekend sessions? Think of this like playing for a few months or a year. I suspect many people would think that because this represents a “longer run,” more values would end up closer to some average. Let’s try it out. 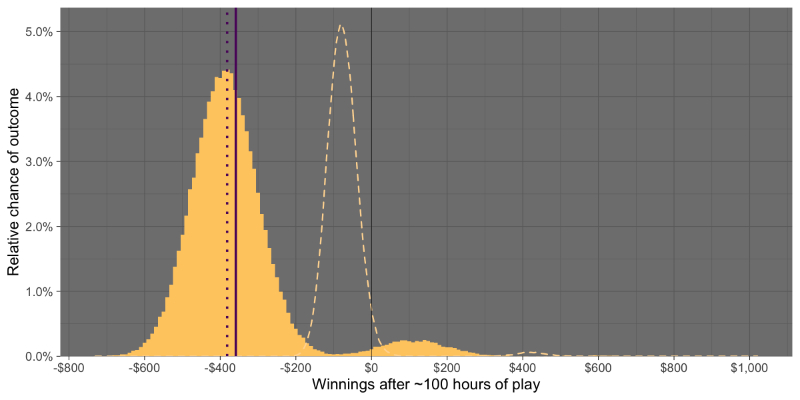 The results are somewhat surprising—a lot of the points are further away from the mean value! The dotted line represents the same curve from the previous graph to make the comparison easier. Interestingly, more people walk away with positive winnings in this scenario. We can see that the hump above zero is larger in this graph since more people are likely to win a jackpot if they play more sessions. Numerically, the percent of people winning money under this simulation is about 5.1%, compared to 3.8% after 20 hours of play.

What is not surprising is that the average person’s winnings are considerably lower. Since the casino always has an edge in their games, it will add up over a longer session. While more people would end up winning money after playing for 100 hours instead of 20 hours, the average amount of money they would expect to win after 100 hours is quite a bit lower. In the end, things sort of balance out.

There’s a lot to unpack from these simulations, and we expect the real world to be even more complex. Most people don’t play the same slot for 20 hours, let alone 100 hours. They will play multiple slots or even multiple different casino games. Each slot and game will have different patterns that will change the long-run results. Despite this, there are a couple of lessons that apply broadly:

Sean Kent is a Ph.D. student in Statistics, and when he's not working on his research, he enjoys applying those skills toward understanding casino games on a fundamental level. He writes blog posts and creates data visualisations exposing the core statistical ideas and technical concepts behind games like craps, blackjack, and slots. Sean has also developed a program that simulates different craps strategies, and he consults on statistical problems—casino-related or otherwise.