Entertainment BlogNHL Player Earnings Per Minute On The Ice

With the second half of the NHL season getting underway, SlotsOnlineCanada decided to look at how much the richest active stars in the league have earned for every minute they were on the ice.

Using Spotrac to identify the 20 highest career earners and Hockey Reference to look at Time on Ice (TOI), the study found that Sidney Crosby had earned a whopping $6,585 per minute on the ice.

“Sid the Kid” also leads the league in active career earnings through 2021 - accumulating $146,890,244 in his career, which is almost 15% more than the second placed Russian icon Alex Ovechkin.

Despite this, Crosby did not have the most dollars per minute on the ice, that title went to his Pittsburgh Penguins teammate Evgeni Malkin, who earned a cool $6,721 for every minute played since he was drafted in 2004.

Malkin, who won the Hart Trophy in the 2011/2012 season, has scored over 400 career goals and racked up almost 700 assists in an illustrious career so far, so his success should come as no great surprise.

It should be noted that Joe Thornton and Zdeno Chara were not included in the study as TOI data has not been available for the entirety of their careers, and the study did also not look at goalies (sorry, Carey Price).

Please see the table below for the full results. 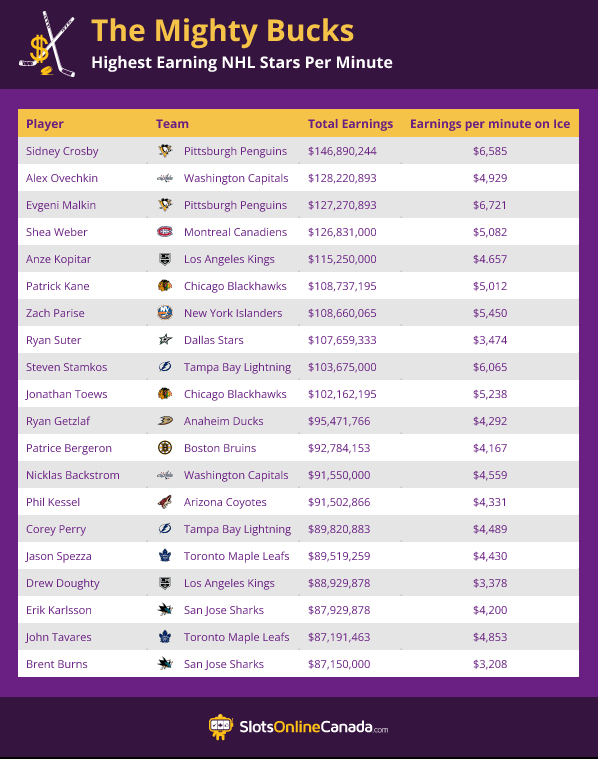