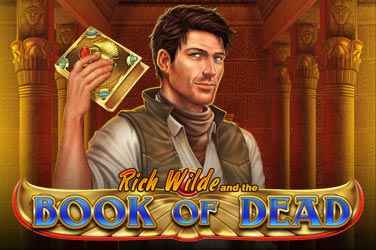 I managed to set off the bonus round by landing 3 book symbols. A large book opened up on the screen to reveal which of the game’s symbols will be chosen to be the special Expanding symbol. The selected icon expands to fill whatever reel it lands on potentially creating spectacular winning opportunities. I have to admit to being more than just a little excited when columns of identical symbols delivered huge wins, sending coins flying out from the base of the reels. Next, I was transported from the base game screen to a secret chamber where I was granted 10 initial free spins that could theoretically be retriggered infinitely with every additional 3 scatter symbols that appear while the feature is active. Of course, this is easier said than done and I wasn’t lucky enough to experience this particular thrill myself. It quickly became evident that the expanding symbol is also the gateway to the game’s top prize as landing a grid full of Rich Wilde symbols will reward you with 5000x your bet.

Book of Dead may have been launched at the beginning of an enduring franchise, but it feels as fresh as ever. What I still find impressive about this title is its ability to generate really exciting moments despite having minimal special features. It isn’t bad to look back either and easily stands up against today’s slots when it comes to the thematic presentation. As far as the features go, it wasn’t too difficult to trigger free spins and it isn’t beyond the realm of possibility to land a grid full of expanding Rich Wilde symbols and claim the game’s top prize of $500 000, although in my case, the book wasn’t so generous.

On the downside, the base game is a bit of a pedestrian experience, I found myself aching for a multiplier or mystery symbol feature to break up the monotony, but that being said, the overall experience is compelling, particularly for a game of its time.