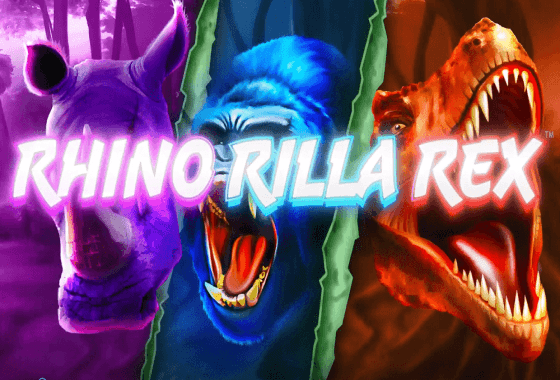 The game’s bonus features are as unusual as its premise as you are rewarded for fusing the animals.

If at least 2 of the beast symbols land fully in view, a new game board appears where only cash prizes, multipliers, and tokens can appear and a terrifying hybrid like a Rexorilla or a Rhino Rilla Rex if all 3 appear. You get a single spin and a multiplier of 2x, 3x or 5x will apply to your winnings.

When at least 3 beast symbols land fully in view, and at least one of them is framed in gold you will receive Team Up Bonus Spins. As in the Team Up feature, a new game board is generated where cash prizes, multipliers, or extra spins can appear, like extra spins symbols that prolong the feature.

You will see 4 progressive Beast Prizes to the left of the reels, and each prize increases as you land the corresponding animal symbols fully in view. During the Team Up and Team Up Bonus Spins features, collected tokens will fill the Beast Prize meters which pay out once they are full.

Rhino Rilla Rex slot has a thrilling theme with wild mechanics, but its execution could be more balanced. I was excited to get my hands on this title after its announcement, because who wouldn’t want to play mad scientist and see what happens when you fuse the titular creatures together. This aspect of the game did not disappoint, the theme was on-Brand for Crazy Tooth with a bizarre premise backed up by immersive graphics.

The Team up and Team Up bonus spins features can be highly rewarding, although there is high potential for frustration, because getting to the top prize of $62 500requires a level of patience that many may not possess. Also frustrating are the minute line wins with the highest value symbols holding rewards worth less than 1x your bet. This game is a mix of hits and misses and might only appeal to a small set of players.