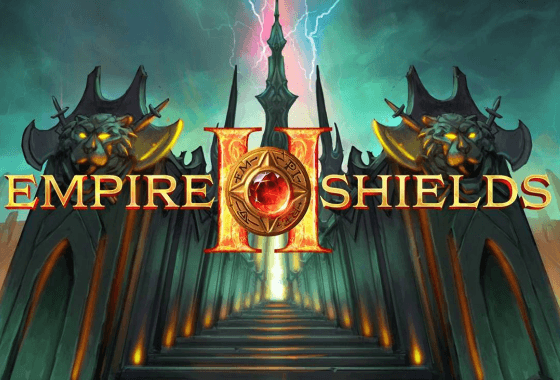 Brace yourself because this slot is packed with an innovative set of bonus features that got my pulse racing.

The circular shields that sit above each reel shift one reel to the left with each spin, each one displaying a certain number of segments that need to be charged up and filled for the modifier attached to the shield to activate.

I counted four possible modifiers that the shields could release once they had activated. The Double Reel modifier triggered after 4 charges and doubled the height of the reel below it up to 6 symbols while simultaneously increasing my number of paylines up to a maximum potential of 7776. The multiplier modifier came at a cost of 5 charges and displayed multiplier values of 2x, 3x, 5x, 8x, or 10x that applied to any wins that involved the symbols from the reel below.

The Wild modifier took 6 charges to get it going and it simply added a wild symbol to a random position on the reel below while the Expanding Wild modifier did the same, except that the wild symbol expanded to fill the entire reel

I had to land at least 3 scatter symbols to trigger the free spins round that started with a Pick Bonus mini-game. The reels were replaced with a 5x6 grid of identical shields and I was directed to choose 5 of them. Each shield I chose moved into a topper opposition above a reel and displayed a random modifier that would remain in action on the reels for the duration of the following feature.

I was awarded 10 free spins where the unmoving toppers had the same charge requirements in the base game. On the tenth and final spin, all the modifiers simultaneously activated, affording me a final shot at a massive win. The best part was retriggering the feature by landing a further 3 scatters to receive a further 10 free spins.

I wasn’t expecting this slot’s gameplay to match its impressive theme title, so I was thrilled when it more than surpassed my expectations. I would argue that the game’s visuals alone make it an impressive feat of iGaming engineering, but I’ll reserve that praise for the bonus feature selection. Reel modifiers aren’t a new concept by any means but I didn’t expect to get so wrapped up in the engaging gameplay as every spin brought unique winning opportunities. While the game’s maximum potential tops out at $243 000, my winning chances were generously frequent, a courtesy that online slot fans such as myself will enjoy immensely.