NewsDragons Of The North Slot Introduced By Pariplay 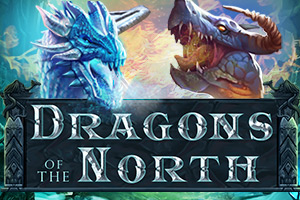 Pariplay Ltd., has launched a new online video slot by the name of Dragons of the North. The company is a leading gaming technology company, which serves lotteries, land-based casinos and iGaming operators. In the newly launched slot game, players are taken on a thrilling journey to the world of adventure and fantasy. The game includes a pulse pounding soundtrack, 4 highly ferocious dragons and highly rewarding gameplay. Gamers will be highly interested in the game looking for triumph.

There are 50 paylines on offer in Dragons of the North by Pariplay. There are also innumerable exciting features in the game which are designed in a manner so that chances of winning rewards increase. Moreover, the gaming experience is also excellent with the slot game. The game is made all the more alluring with the help of excellent graphics. The landscape in the game is treacherous, but extremely colorful and thus demands deeper exploration and encourages deeper play in the magical world of the game.

Various special reel prizes can be triggered with the Golden Dragon Egg symbol in the game. This symbol is also a kind of a Wild in free spins and base game. There are various kinds of rewards which are possible, including a cash prize. The multiplier win is based on total bet. There are also 10 free spins which come with the opportunity of winning additional 2 spins. Players might also be lucky in winning one of four various jackpots, where the multipliers range from 15x to 1000x. A special Jackpot Wheel can also be spun by players which in turn will get them a chance to win a mini, minor, major or grand reward.

The other winnings include some random multiplier, which increases rewards for the current spin by various degrees – 2x, 5x or 10x. The Reel Tilt feature plus The Stacked Wilds feature can help in nudging players to some extra rewards with some random reel tilt. This happens when two stacked wilds land up on a reel, but are moved up and down, leading to three stacked wilds.

The return to player rate for Dragons of the North is attractive 95.98%. The game is available for global players in 20 different languages. For optimizing player enjoyment further for players, the game is developed in HTML5. Thus, it can be played on desktops as well as on mobiles. The mobile portrait mode of the game lets players easily switch to one-handed gameplay.

Isle of Man and Malta are the two leading gambling regulators in the EU and this slot game has been certified by them. This slot game is the latest addition to Pariplay’s bouquet, which already has more than 100 online casino games. Along with its branded and original slot titles, there are other things that the company provides as well like online bingo games, online scratch cards and instant win titles.

The Commercial and Marketing Director of Pariplay, Richard Mintz opined that they are very excited about Dragons of the North. This is following the great success of Rumble Rhino slot which was launched in March. The experiences of each of these games are highly rewarding with innovative gameplay features. This new game comes with special features and attractions.