Asia is a continent with a fascinating blend of cultures where cutting-edge technological innovation exists alongside ancient traditions. The intriguing nature of this continent makes for ideal subject matter for video slots, and we have combed through the wide selection of available Asian-themed titles to bring you a list of some of the best you could try today.

1. Legend of the Golden Monkey 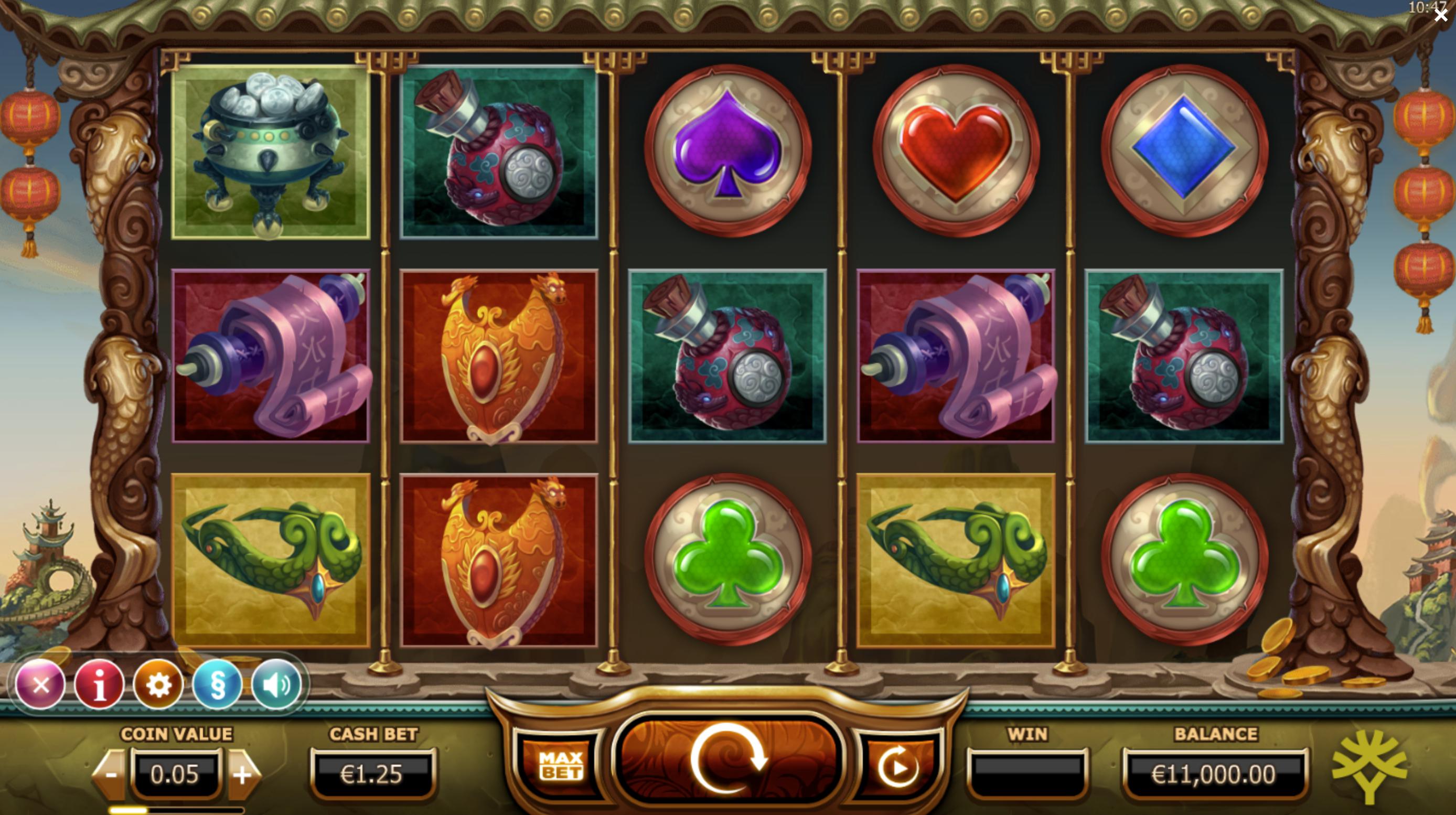 Yggdrasil’s homage to Chinese mythology is a richly illustrated title with a spread of thrilling bonus features. The game is set on a 5x3 reel, 243 payline layout, accompanied by forgivingly low volatility gameplay. Ancient-looking crowns, flasks, shields, vases, and scrolls are some of the game’s high-paying symbols, along with sticky and countdown wilds that remain on the grid for more than just one spin.

Treasure chest symbols dish out cash rewards and can also trigger free spins. You can access the bonus round by landing 3 scatters, and you will be given the choice of 3 free spins modes with extra wilds, sticky wilds, or stacked wilds. 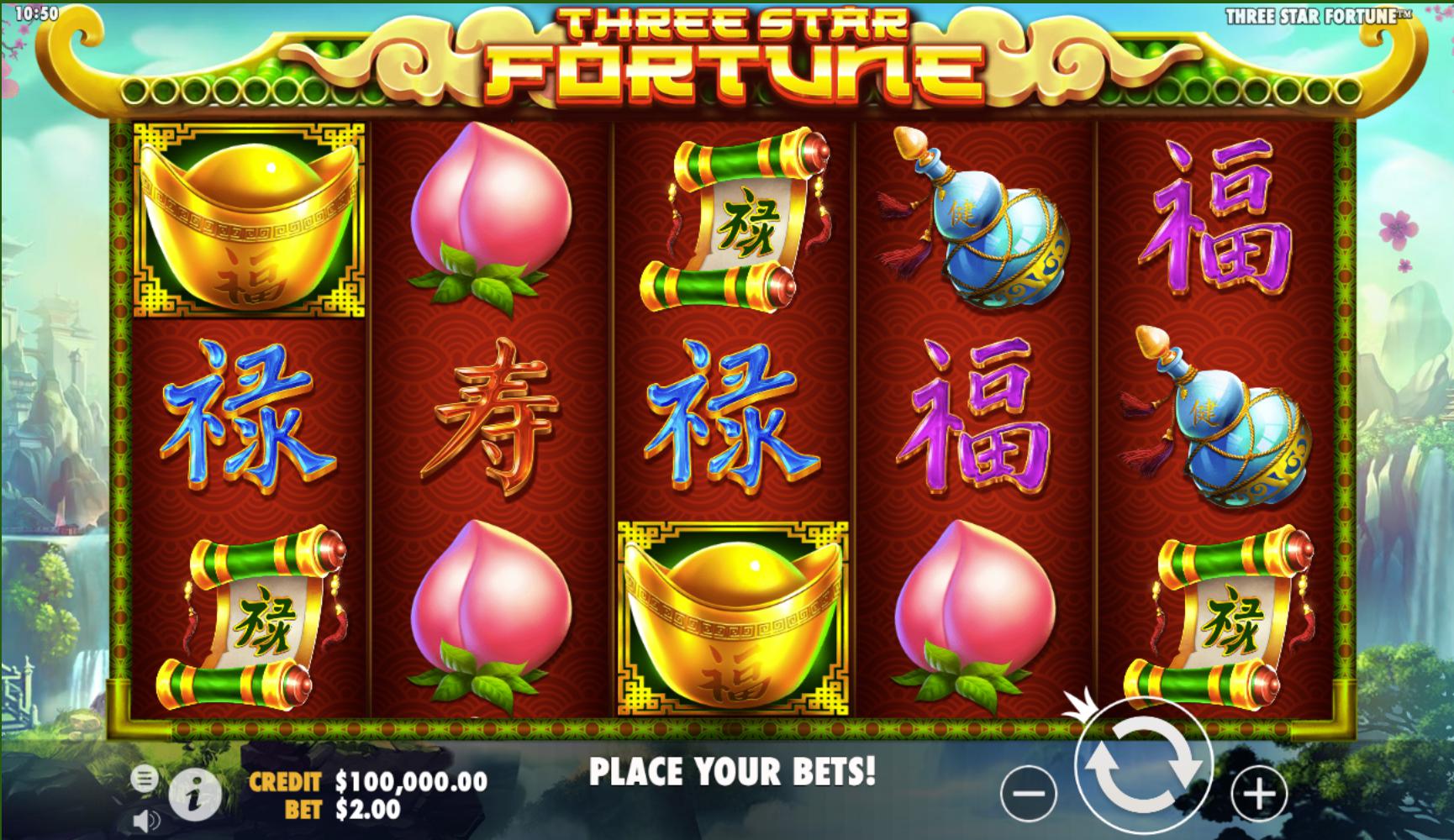 The Chinese deities, Fu, Lu and Shou, embody wealth, status and longevity, and they are also the main characters in Pragmatic Play’s Three Star Fortune online slot. These benevolent beings appear as wild symbols in this 5x3 reel, 10 payline game, and they expand to fill the entire reel wherever they land. The other major symbols on the paytable include gold ingots, peaches, scrolls, and vases.

Aside from standing in for regular symbols, the wilds will also trigger a respin when they appear. If another wild lands after the respin, the process repeats until no more wilds appear. A long enough sequence of this type could see you take home up to 5000x your stake. 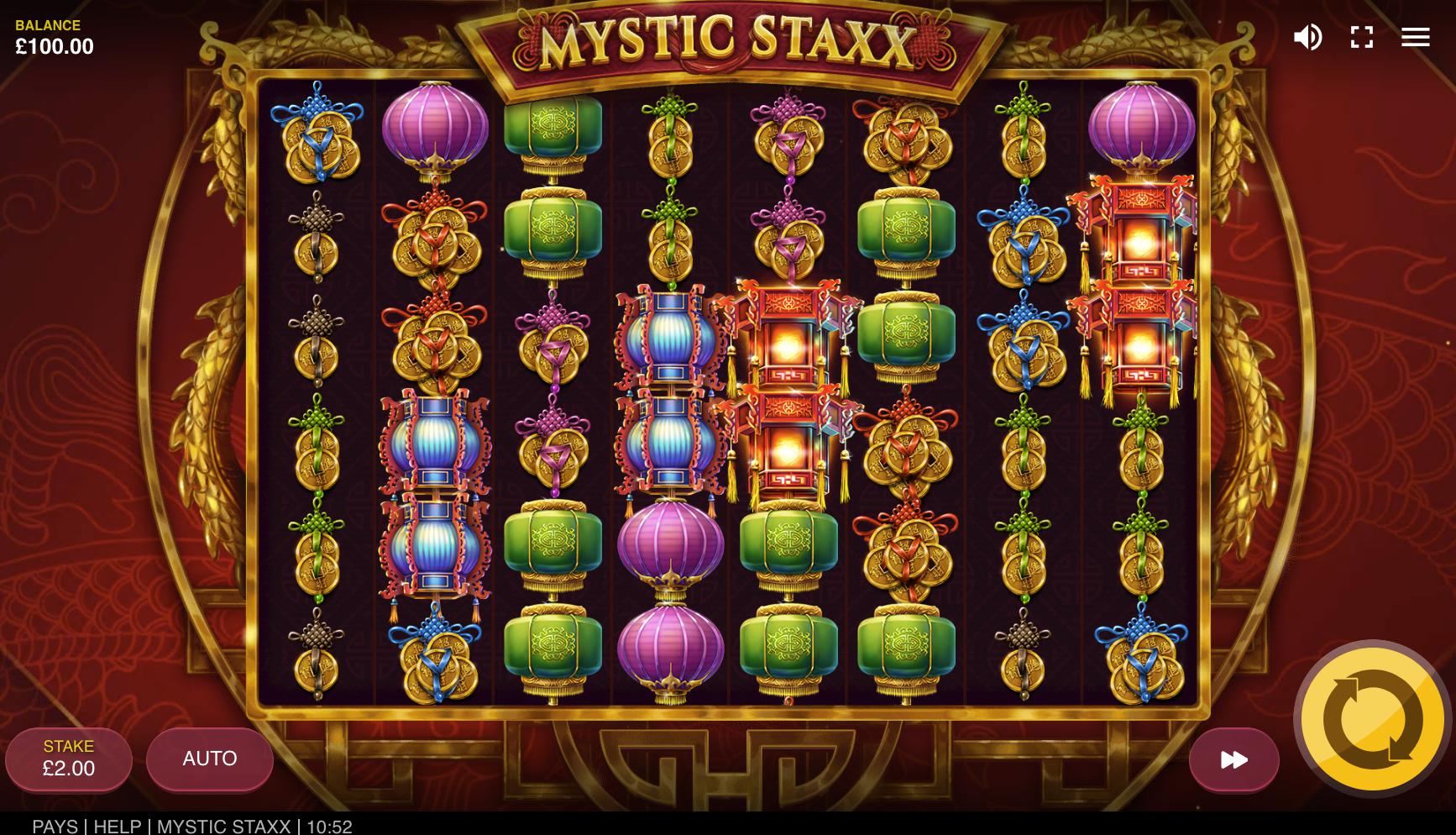 This title by Red Tiger proves that bigger is better with a giant game grid and massive symbols and a heaping helping of Chinese cuisine imagery. The 8x6 reel set has 40 paylines and the high volatility gameplay delivers potential worth up to 2000x your stake.

The game starts you out with 2 position-high symbol stacks on each reel, but when you land the 3x3-sized Expand symbol fully in view, the stack sizes will increase by +1 symbol per reel. When the symbols stack sizes reach a maximum of 20 symbols in height, the Expand symbol turns into a 3x3 mega wild.

Inari Ōkami, the Japanese goddess of foxes, fertility, rice, tea, and sake, takes centre stage in Play’n GO’s medium volatility, 3-reel title. This game samples deeply from the mythology of the character, even reflecting the fact that she is made up of 5 different deities through the progression of the bonus features.

The Inari symbol appears as a stacked wild and can be nudged fully into view if it only lands partially on the reels. The symbol will also bounce around the grid when it is involved in a win, changing appearance from a human into a fox. Inari stacked wilds also generate respins where the wild symbol will wander across the reels, triggering an increasing win multiplier worth up to 25x.

Nolimit City invites you to the aftermath of a devastating battle where the way of the samurai will guide you to riches. The 5x4 reel grid boasts 1024 paylines and tall 1x4 samurai symbols that can land partially or fully in view, alongside a 1x4 geisha symbol that gets nudged fully into view whenever it lands and generates a multiplier of up to 4x.

Wilds that appear on reels 3, 4, and 5 can split into as many as 4 symbols, boosting your ways to win up to 12 288. The Oni Transform feature transforms scatters and lower-value symbols into the same high-value symbol when a scatter and stacked samurai land at the same time. The Shogun bonus round is triggered by 3 scatters and awards you 8 free spins with extra wilds. 3 scatters and a Wild Geisha symbol on the same spin will activate Geisha Spins where multiplier wilds are frozen in place. 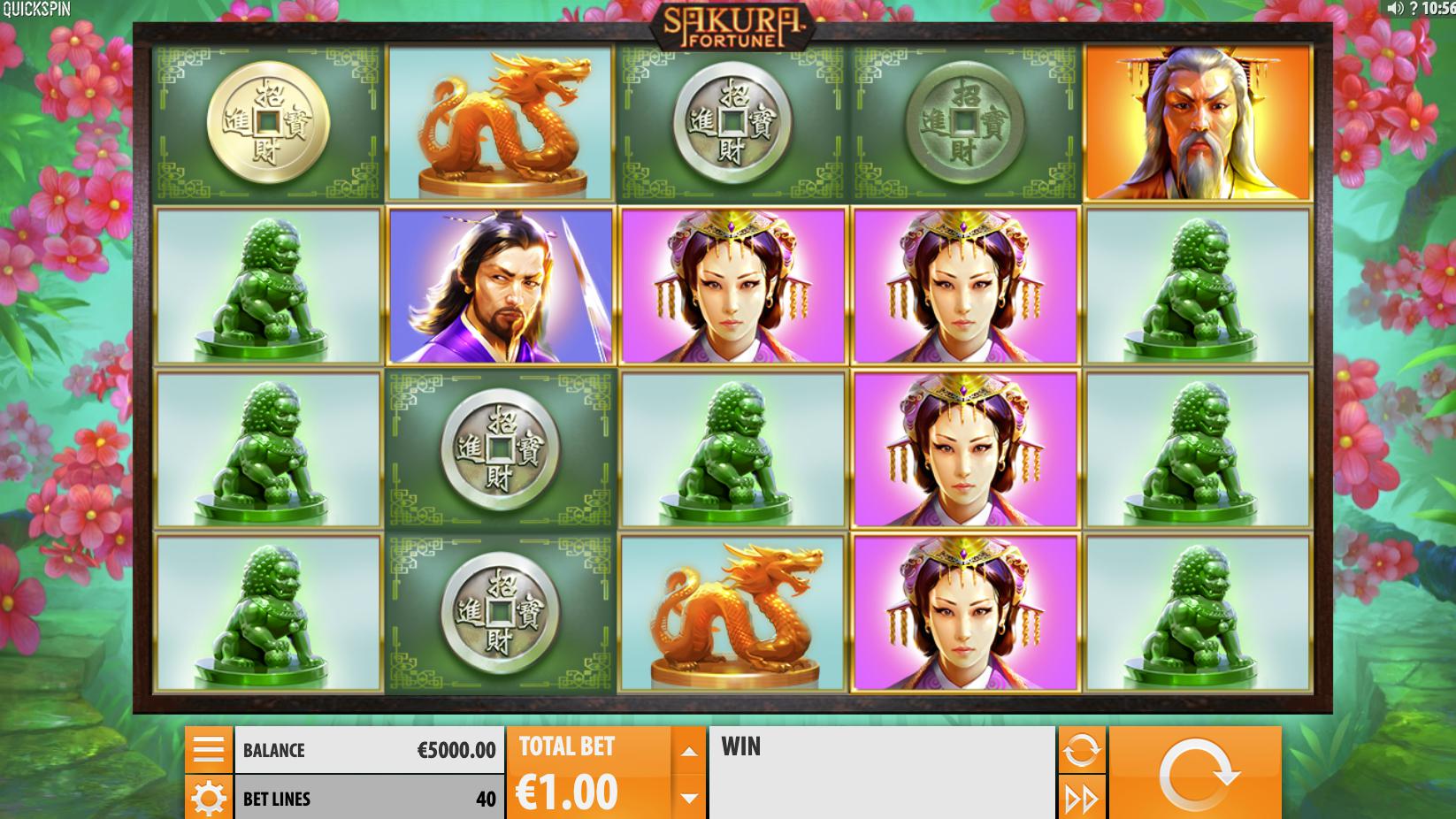 Gaze upon the beauty of a cherry blossom princess in this 5x4 reel title by Quickspin. Clad in red and brandishing a katana, the princess character appears as a game symbol, along with an emperor, an empress, a warrior prince, and dragon and lion figurines. The reels are plain and surrounded by greenery and delicate blooms.

When the stacked princess wild appears it will automatically be nudged fully into view and trigger Sakura Fortune Repins where a respin is generated for each stacked wild that appears. The Chinese fan scatter symbol helps to activate the free spins feature where all wilds are sticky and grant you an extra free spin each.

It’s all about the money in this 5x4-reel Chinese-themed Red Tiger title that celebrates the culture’s god of wealth who dishes out cascades of gold coins to enrich your bankroll. The smiling deity Cai Shen is the game’s wild symbol, appearing with red envelopes, rings, coins, and tiger statues as some of the game’s symbols. The reels are lined in gleaming gold with Chinese lanterns and coins in the background.

The Cai Shen wild we mentioned before is 1x2 in size and appears on the central reels only. The wilds also come with 2x win multipliers attached, and they can transform up to 3 adjacent symbols wild. Land 3 scatters to trigger the bonus round that will move the triggering scatters to the centre of the screen, waiting for you to click on them to claim multiplier rewards and up to 10 free spins.

Pragmatic Play’s ornately decorated 5x4 reel, 20 payline slot offers brightly coloured Asian imagery and the chance to claim up to 5000x your stake. Coins, scrolls, urns, fish, frogs, and gold ingots appear as symbols, paying up to 40x your stake for 5 on a payline.

Ying Yang Super Wilds appear on reels 2, 3, and 4, randomly distributing up to 3 regular wilds to scattered reel positions. Land up to 5 scatters to reveal bonus wheels that can collectively award you up to 30 free spins where Super Wilds remain locked on the reels for the duration of the feature. Scatter symbols also add half a wild to a random Super Wild, allowing you to ‘upgrade’ them as you play.

Swing your sword alongside an ancient warrior in a Japanese-themed title by Greentube. Wartime imagery and serene gardens accompany the katana-wielding fighter and a beautiful princess as the game’s symbols. The 5x3 grid is laid out on a red wooden surface with payline indicators lined up on either side.

Landing 3 scatters will activate the free spins bonus round where the warrior wild expands to cover any reel that it lands on. The game also includes a Gamble feature where you can bet your winnings on whether a face-down card will reveal a red or black suit. 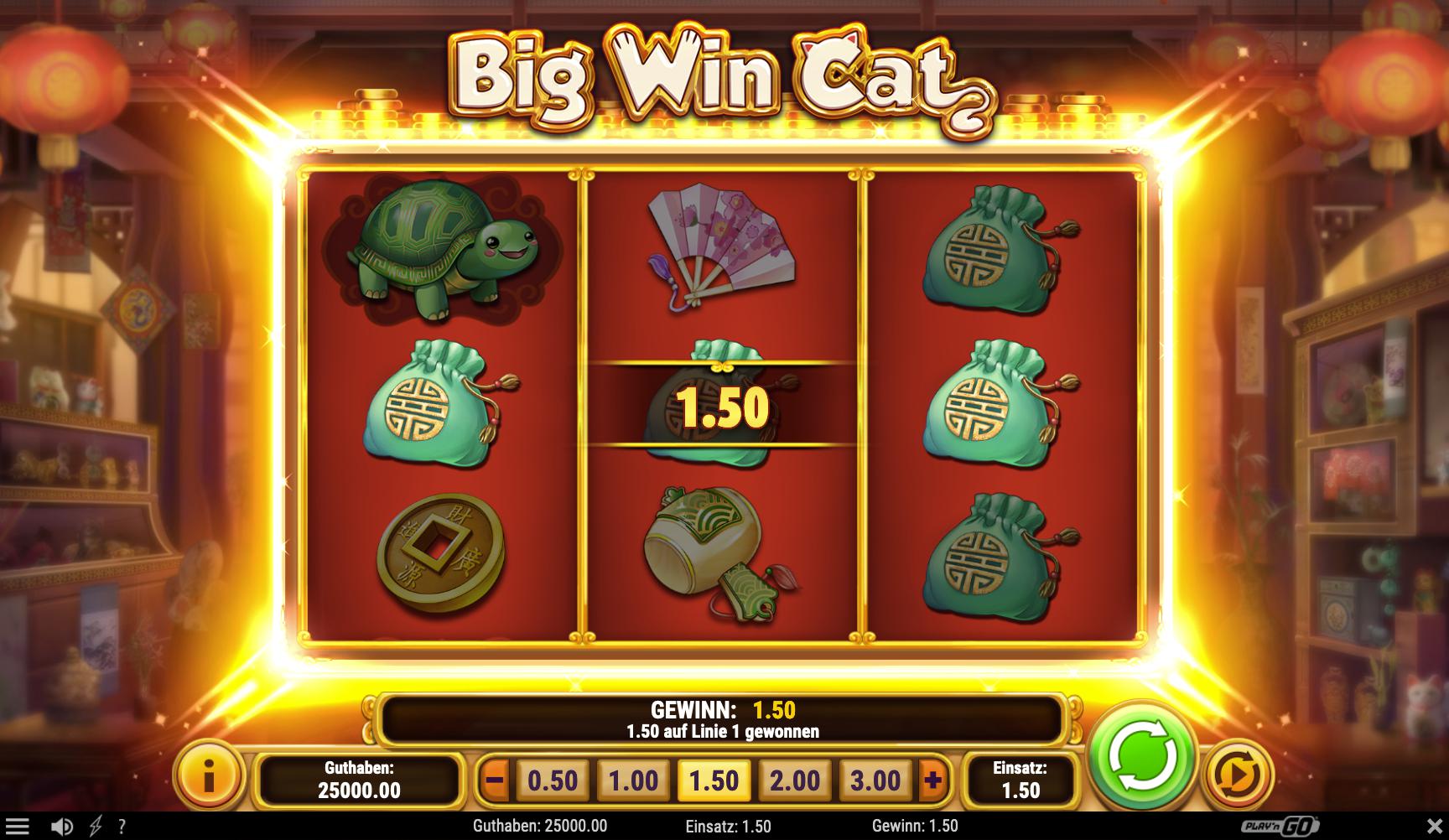 Maneki-Neko are Japanese cat figurines that you will often see in Asian establishments, waving their beckoning paws. These cute miniatures are said to attract good luck to the owner and they are the centrepiece of Play’n GO’s medium volatility, 3-reel slot. The friendly feline is the game’s wild symbol and goldfish, pigs, tortoises, and other Asian items make up the balance of the paytable.

Jump into the cutest kitchen caper in the world of online slots with Nolimit City’s Asian cuisine-inspired slot. This 5-reel, 20 payline title offers a maximum winning potential of 5000x your stake and a cast of delectable ingredients, like salmon, ginger, radish, and rice as the game’s symbols. The reels are shaped like a cutting board and the ninja Bunshin wilds clone themselves, spreading up to 2 additional reel positionswhen they appear.

Land the salmon, rice, and soy symbols on the same spin to trigger Wild Sushi free spins. During this bonus round, ingredient symbols can transform into wilds. If you land 3 or more consecutive wins, the Kamisabi Second Chance feature kicks in, boosting your chance to gain extra wins. 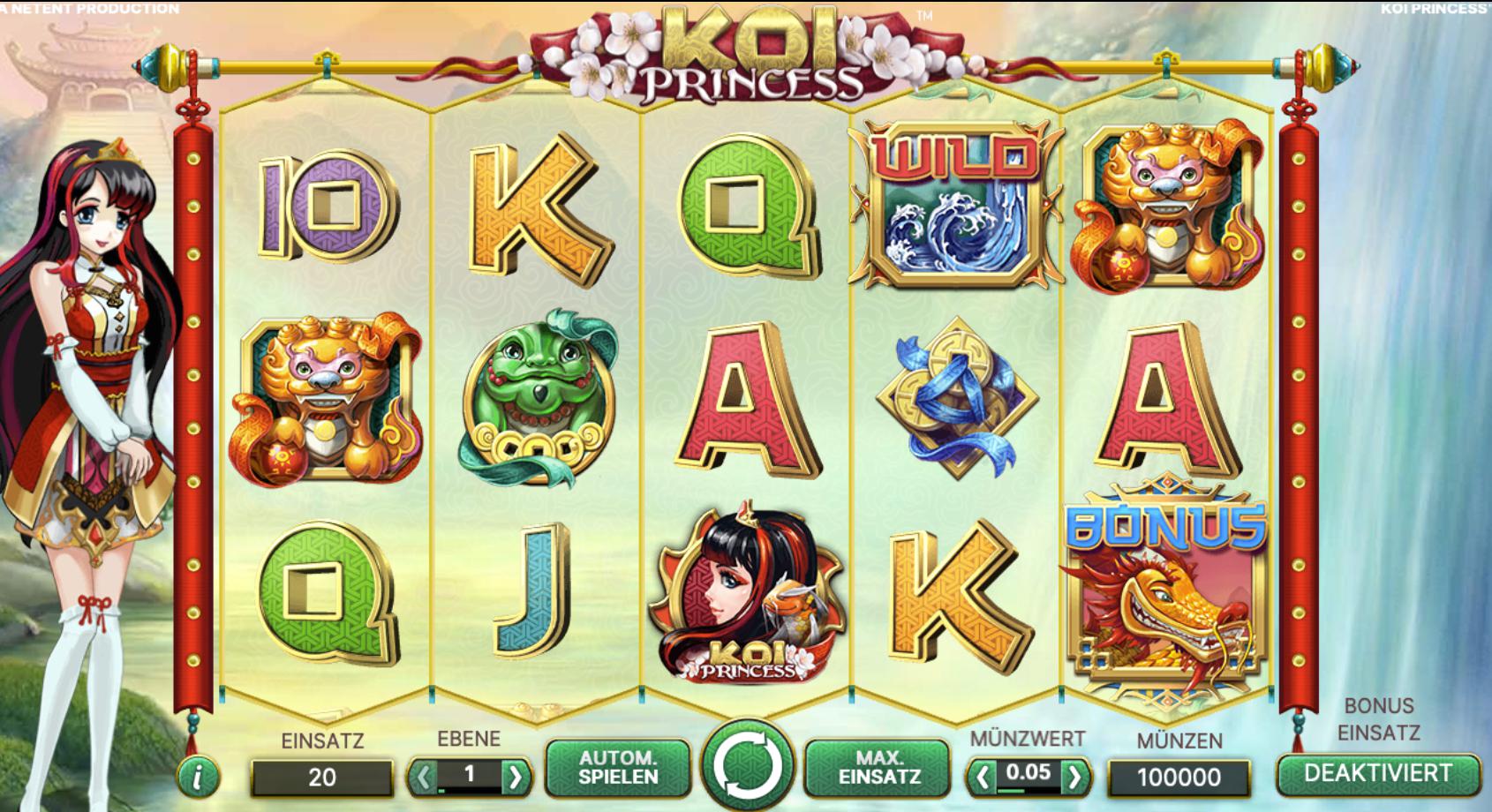 Koi Princess is NetEnt’s first-ever anime-inspired online slot with a large selection of bonus features and a cute protagonist who is here to help you win a bundle, while occasionally piping up to cheer you on. The princess is joined by a dragon, a green Koi fish, and coins as symbols on the paytable. The game displays its generosity with 4 random modifiers that can kick in at any time. These can award you with guaranteed 5-symbol wins, random wilds, wild reels, and random activation of bonus features.

The Coin win feature is a random cash prize with a multiplier of up to 30x, the Wheel of Fortune can award you with a 1000x jackpot, or a handy free spins trigger. Sure Win free spins guarantee that every subsequent win after your first will be at least as big as your first one, and extra wilds are added to the reels. During Wild Reels free spins, entire reels can turn wild, giving you a huge winning boost. 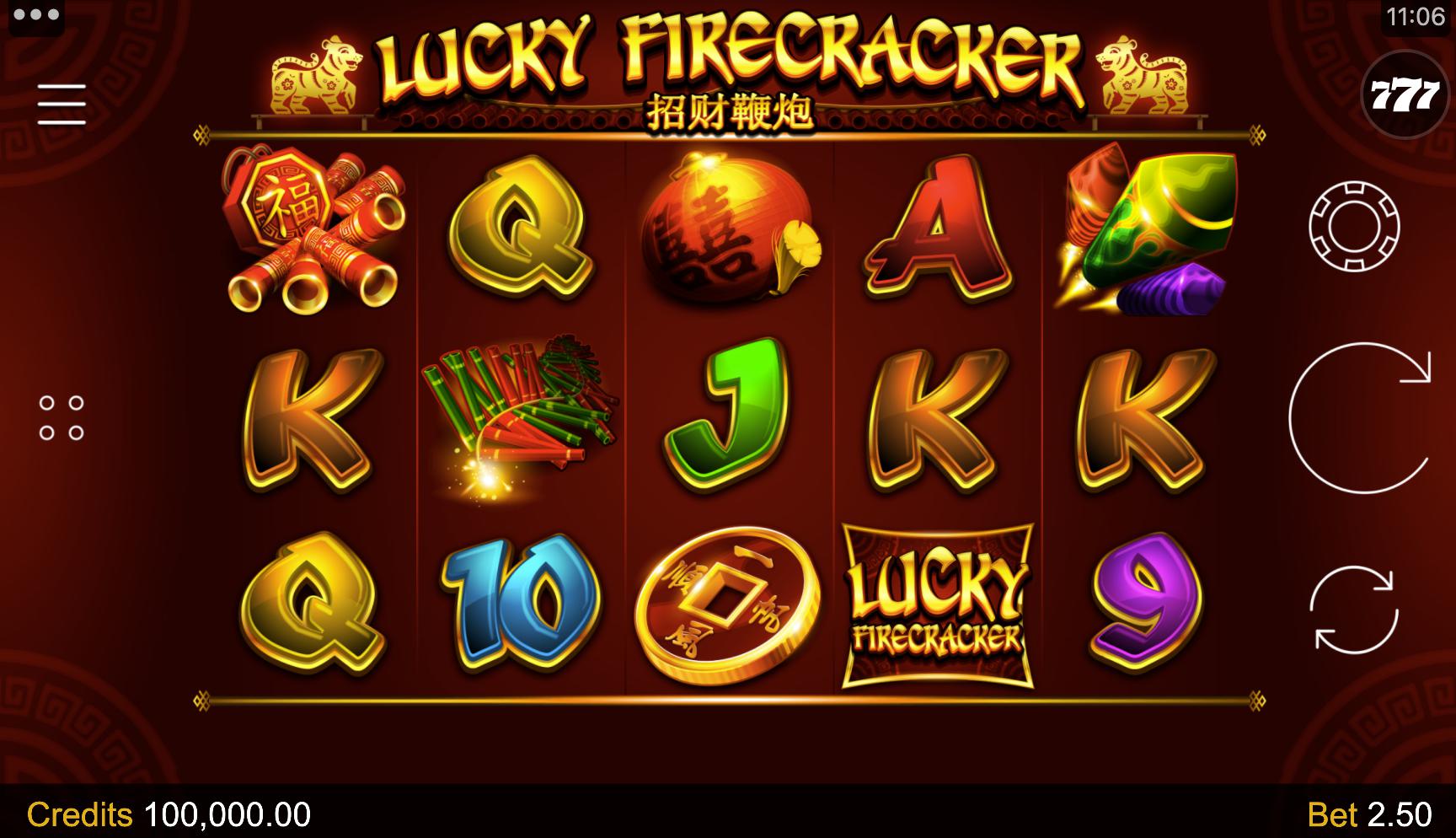 Lucky Firecracker is a simple 5-reel game by Games Global that celebrates the spectacle of Chinese fireworks. The Reels are filled with sparklers, crackers, rocket-shaped fireworks and other gunpowder-fueled delights.

Land at least 3 scatters to receive 15 free spins where every win receives a 3x multiplier for huge prizes. Landing 5 scatters also rewards you with a 1000x your stake payout, so just triggering the bonus round is a great prize within itself. Don’t forget the Gamble feature where you have to guess whether a face-down card will turn up red or white to either double your win or lose it all.

14. The Legend of Shangri-la 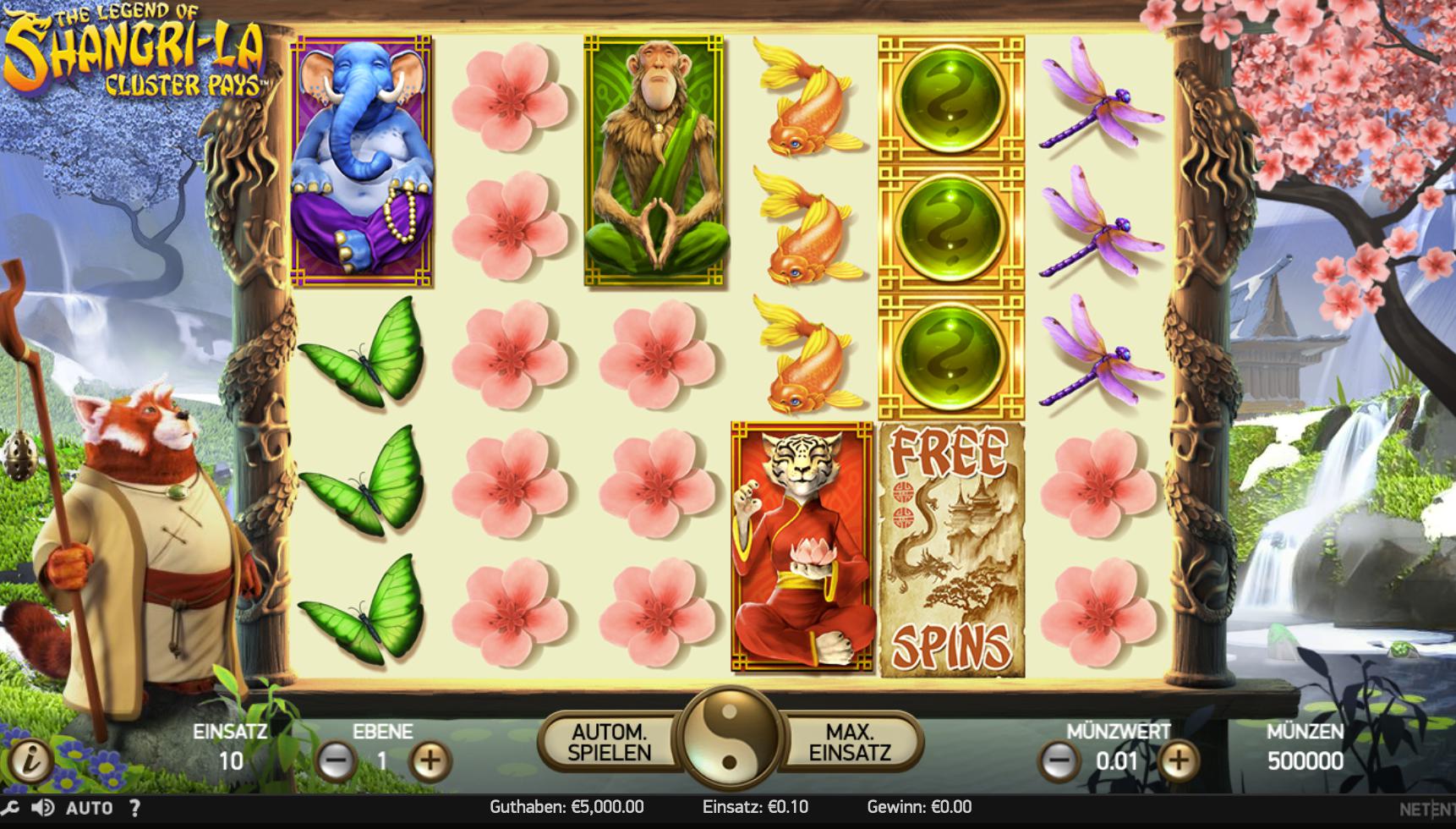 Discover the path to enlightenment as an old monk guides you in this Yggdrasil title that features 6 reels, and a cluster pays mechanic. 2x1-sized Meditative animal gurus and beautiful flora and fauna are the symbols you will see throughout the game. Special Substitution symbols transform into an adjacent symbol and guarantee you the highest possible winning cluster combo.

The red panda monk stands to the left of the reels, coming to life when youtrigger bonus features, like Random Substitutions that activate when at least 2 clusters of the same symbol appear during the base game. Sticky Respins are triggered when 2 non-winning clusters of the same symbol appear anywhere on the reels. The triggering symbols stick to the reels while the rest of the grid respins.

Landing 2 scatters will nudge any partially visible scatters fully into view but landing up to 6 scatters in the base game will award you with up to 8 free spins. 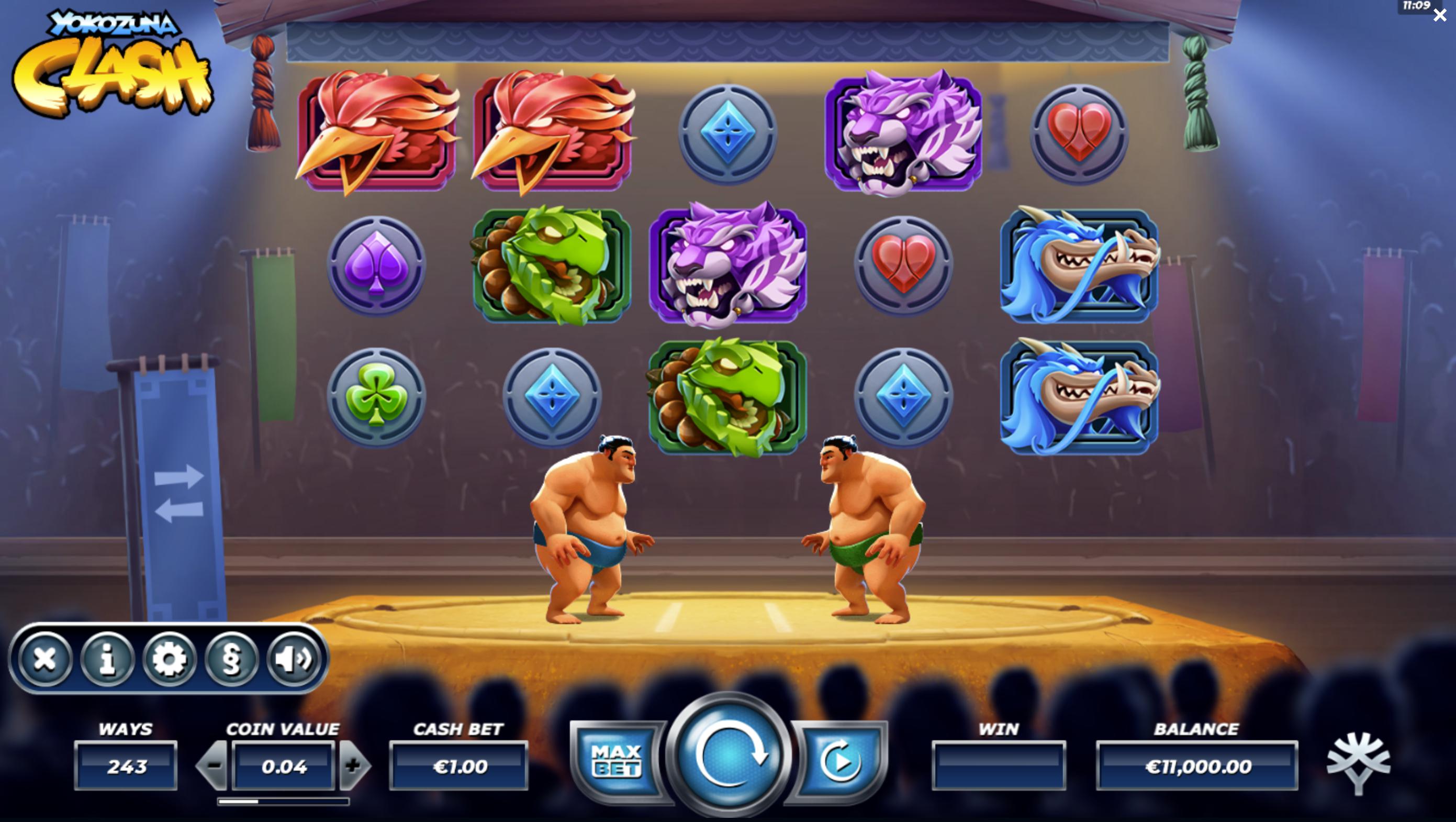 The ancient sport of Sumo is the central focus of Yggdrasil’s 5x3 reel, 243 payline title where the transparent game grid is suspended in the air, above a packed Sumo arena where two large athletes are about to clash. A red phoenix, purple tiger, green turtle, and blue dragon are the game’s higher-value symbols. An ever-present reel multiplier mechanic awards you multiplier boosts, based on how many symbols are involved in your wins.

Land any 5-of-a-kind symbol combo to trigger a Sumo Clash, which will add more winning symbols to the reels, giving you an even bigger win. Landing 2 scatters on the first and last reels will activate Yokozuna free spins, which take the form of a multi-level tournament. During the competition, one of the wrestlers, Riku, can randomly add up to 4 wilds to the reels, and the other, Haru, can add up to a 4x multiplier to any spin.

The wrestlers will battle either Daisuke or O’Connor who also add multipliers and wilds. Left-to-right wins cause you to push your opponent, and right-to-left wins see you pushed back. Defeat the first round to face the fearsome Yokozuna and have your wins multiplied by 2x if you win.