In a first for Quebec’s lottery, a $6 million check was handed over to a winner by a life-sized robot constructed by a team of college students.

Laurentides resident Guylaine Desjardins scooped 1 July 6/49 massive prize on 1 July after playing the same lucky numbers for 25 years. She bought her ticket at her workplace, choosing the numbers 1, 12, 27, 30, 34, 49, and bonus number 35, for what must have felt like the millionth time.

It was several days later when Desjardins realized she was holding on to a $6 million life-changer according to a report from Loto-Quebec.

"Wait, let me go get my glasses!" she said to officials when she realized she had won. 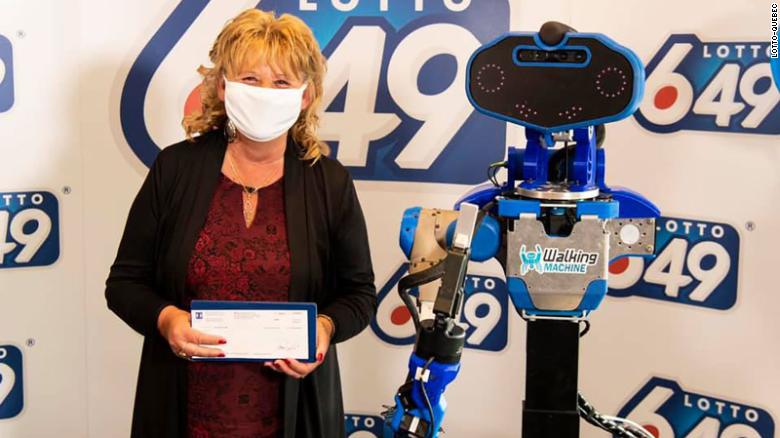 A Canadian lotto ticket goes for $3 and the odds of hitting a jackpot are approximately 1 in 14 million, as per Loto-Quebec.

Recent social distancing guidelines designed to battle the spread of the pandemic prevented Desjardins from receiving her prize regularly, so a creative solution was hatched to safely get the winnings to the winner.

The July 23 ceremony complied with the current strict public health guidelines and was streamed live on Facebook with the physical attendees wearing masks and maintaining a distance from each other. The only exception was the one individual who has nothing to fear from the virus, the robot named SARA.

SARA is an automated robotic assistance system that was conceived and constructed by students at the University of Quebec’s School of Engineering and the team at Centec, a non-profit that offers support to tech startups. The students from the engineering school's Walking Machine club controlled the robot at the prize payout ceremony held at the Casino.

"A great experience and a well-deserved outing for our robot who was alone since the beginning of the quarantine!" exclaimed a Facebook post from the Walking Machine club.

The lucky winner plans on getting herself a three-wheeler motorcycle, spoiling her two sons, and getting some travel in once pandemic regulations are relaxed enough.

Desjardins works at the convenience store, Dépanneur Lacelle where she bought her winning ticket. The store will receive a 1% commission of $60,000, according to Loto-Quebec.