Many of the longest games of anything in world history are poker games, with some international poker championships going on for days, or, in some very rare cases, years. Here we present 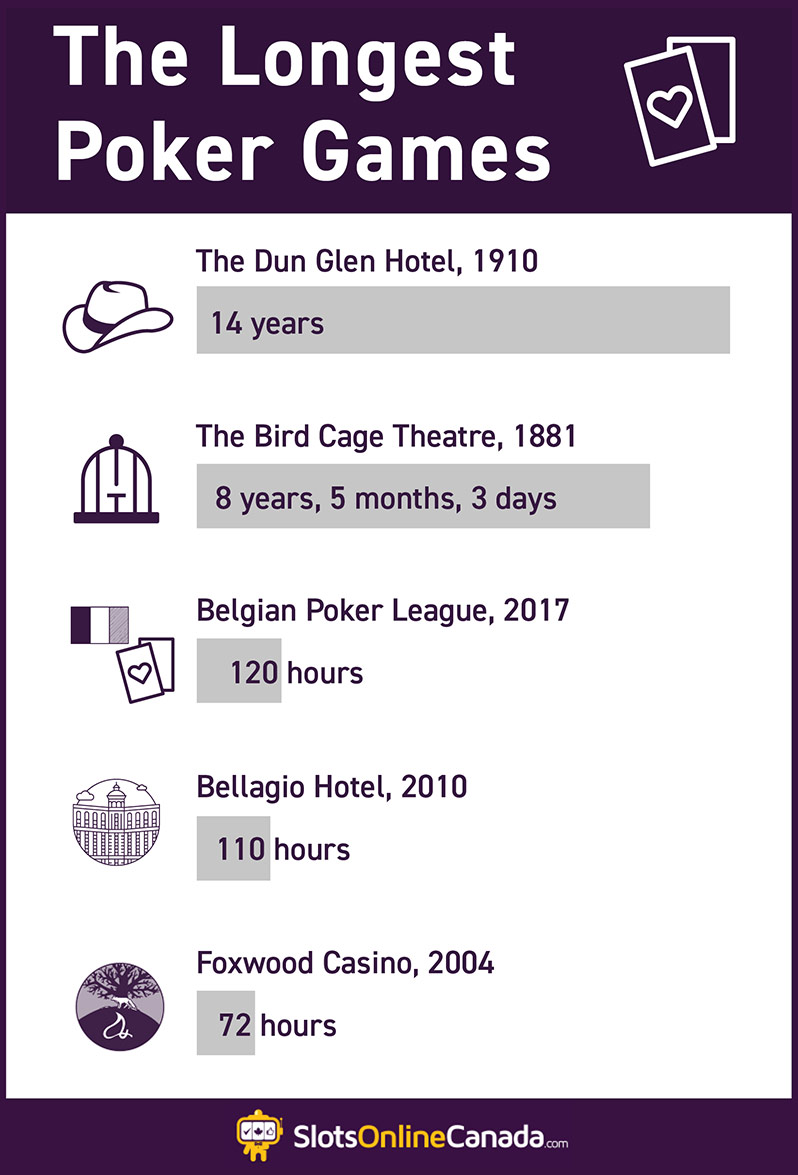 Foxwood Casino, 2004 (72 hours)  Before Laak's record-breaking winning, the title was held by Larry Olmsted, who played a game of Texas Hold 'Em for 72 hours straight at the Foxwood Casino Resort in Connecticut back in 2004. Olmsted has had something of a rivalry going with Laak over the years, with both vying to outdo each other in their dedication to poker. Whether Olmsted will retake the top spot remains to be seen.

Bellagio Hotel, 2010 (115 hours)  The award for the longest poker session by a single player goes to Phil Laak, the Las Vegas legend who played through a mammoth 115-hour session at the Bellagio Hotel and Casino. During the game, Laak was permitted to take a four-minute break every hour, during which he would head to the bathroom or the shower that was set up near the table. By the end of the almost five-day poker session, Laak was up by $7000 and had earned a world record title, after which he donated the money to charity.

Belgian Poker League, 2017 (120 hours)  Other than the legendary poker games of yore, sessions lasting more than a few days are hard to come by. A record-holder for the modern era is the Belgian Poker League in Antwerp, which broke the Guinness World Record by arranging a marathon 120-hour session of Texas Hold 'Em, in which players could buy-in for $5 and take the occasional short break between rounds. The proceed from this impressive feat of poker playing largely went to charity.

The Bird Cage Theatre, 1881 (8 years, 5 months, 3 days)  The Bird Cage Theatre in Tombstone, Arizona, was built to cater to the gambling tastes of the mining industry tycoons who were building a new world in the Western United States. While there are many anecdotes from this legendary venue worth telling, none are more outlandish that the poker game that began there in 1881, and continued for close to eight and a half years. Buy-in for the game was $1000, an unimaginable sum at the time, and it is estimated that $10 million changed hands over the course of the game. It is also said that some legends of the Wild West, such as Wyatt Earp and Doc Holliday, spent some time at the table during this marathon card session.

The Dun Glen Hotel, 1910 (14 years)  In Thurmond, West Virginia, during the height of the mining boom, the rich, famous, and hedonistic flocked to the opulent Dun Glen Hotel for a round of high-stakes poker. The owner of the hotel, Thomas G. McKell, was always keen to impress and entertain guests who were passing through the small town with an unforgettable party. Perhaps that is why he hosted a poker game that begun in 1910 and continued without technically finishing for over 14 years, according to the Ripley's Believe It or Not, making the now-demolished hotel the site of the longest poker game ever played.

Sport and Canada in the 21st Century: How Canadians Became Gluttons for Sport