This new game awards players ten free symbols for each Scatter symbol that appear on the reels. Once a sushi symbol appears on the reel, a 15 times multiplier is triggered in the game.

Hey Sushi is one of the latest entries in the Habanero game collection that has over one-hundred amazing real money slot games. These games are immersive and are sure to attract lots of players to the operators using Habanero’s collection. In recent months, Habanero has signed multiple deals to ensure that its games reach a wider audience. 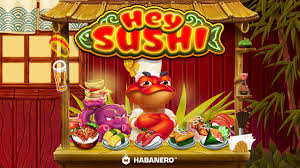 On the launch of the new game, Head of Business Development Europe at Habanero, Arcangelo Lonoce, said, “We are thrilled to unveil our latest enthralling slot, the instant culinary classic that is Hey Sushi.” He further mentioned that “With a wealth of delightful symbols, flawless mechanics, and an authentic original soundtrack on the menu, even the most disciplined of players will struggle to save this one for last. Draw up a chair and get your sushi skills ready, we promise you’ll be in for a treat!”