Quickspin’s new sequel in one of its popular slot series, Sticky Bandits 3 is live and ready to play. The Wild West heist-themed game features five ferocious female desperados as they put everything on the line for the big score.

The slot has a 5x9 reel format and features including Scatter Wins, Sticky Wilds, and Casino Spins with a maximum win potential of 22 000x your stake.

The five banditas all represent Scatter and Sticky Wild symbols and landing five of them on a single spin will award you 2500x your bet.

The wins come hard and fast with 2 scatter symbols or more on the reel awarding you an instant cash prize. Landing 3 or more Scatters lets you claim 12 Casino Spins that come with a 2x multiplier. While the feature is active, Wild symbols can transform into Sticky Wilds.

If you’re looking to avoid the effort, you can use the buy feature and trade 60x your wager to trigger Casino spins.

Quickspin’s Game Studio Producer, Clint Andersson, stated that the success of the new title’s predecessors inspired the studio to pay even more reverence to the western genre and that Sticky Bandits 3 Most Wanted, continues a strong narrative and will further boost the profile of the already popular IP. He also mentioned that the new title comes with a freshly created math model, an upgrade from the previous titles.

Andersson said, “Following up on the success of our previous two Sticky Bandits titles, we wanted to make a great tribute to the western genre. Sticky Bandits 3 Most Wanted is a game with a solid narrative, based on the same strong IP as its predecessors.”

He further elaborated that the white hat-wearing, double pistol-wielding protagonist is back in the sequel along with her new posse of female outlaws, each with their own unique character and background, depicted through their custom animations.

Anderson wrapped up, saying, “I’m really pleased with how everything came together towards the end of production, as all the pieces fell into place and the game feels like a solid quick action slot machine. And there’s a chance to win big, with a maximum exposure of 22,000x the bet!” 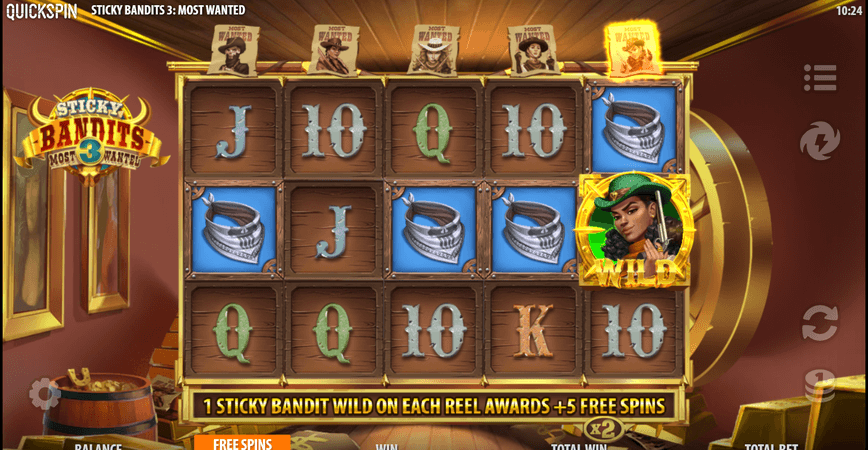