Cracking open a piggy bank is a childhood memory that many people look back on with fondness. Laying out your riches after all your meticulous gathering inspired an exciting feeling that is hard to match. Pragmatic Play wants to take you back to the thrills of your yesteryears with its new online slot title, Piggy Bank Bills.

Rich-looking portly pigs decked out in expensive finery share their wealth with you while a beachy-sounding soundtrack completes the ambience. This highly volatile game was launched on October 7 2021 and features a 6x3 reel layout with 9 paylines. Join up matching pieces of torn banknotes to win as you spin for a chance at the slot’s top potential of 5000x your bet.

This potential will sit well with high rollers as the most you can bet is $175, while more casual players will appreciate the point of entry which is a mere $0.25.

The slot’s RTP comes in at 96.5% and while regular pay symbols will get you wins worth up to 1000x your stake, there are lucrative bonus features on hand to send your winning potential into the stratosphere.

The game contains 3 random modifiers that can appear at any point during gameplay. The Piggy Win feature transforms 2 or more losing symbols into winners after a losing spin, the Piggy Bonus could randomly trigger free spins, and Piggy Wilds adds up to 4 wild symbols to the reels.

Match up two scatter banknote halves to receive 8 free spins and watch lower value bills disappear from the reels. Random 2x or 3x multipliers will appear while the feature is active.

“We’ve released our fair share of money-inspired slots over the years, but none of them are quite like Piggy Bank Bills™. The innovation that has occurred behind the scenes to facilitate the creation of a truly original slot design has never been seen before, and we expect it to go down our treat with our audiences.” 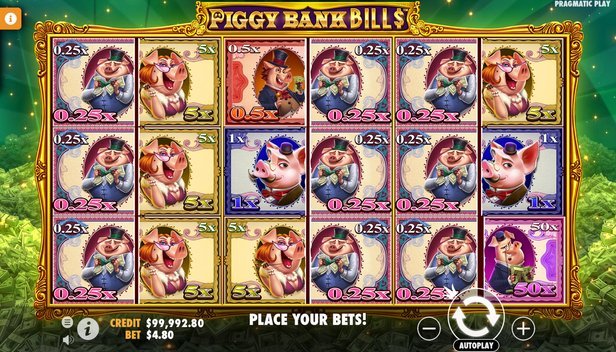