Deck the halls with Play’n GO and embark on an adventure made for the festive season with the provider’s latest slot release, Moon Princess: Christmas Kingdom. This game is the follow up to 2017’s Moon Princess and showcases the feisty female royal protagonists, Love, Star, and Storm as they explore the Christmas Kingdom realm. In this 5x5 reel title, our heroes are on the trail of a mystical fox with supernatural powers.

The game’s theme portrays a Christmas-infused anime environment with plenty of festive adornments like bells and ornaments, and the princesses decked out in Yuletide gear.

A cascading wins mechanic removes winning symbol combinations of 3 or more and new symbols will fall in their place while a wild symbol shows up to give you a winning boost.

Mistletoe is worth more than just a kiss in this slot experience with instances of the leafy symbol randomly added to the reels on every spin. If a win involves a mistletoe symbol, the game’s win multiplier will increase by +1, resetting in between spins.

The Girl Power feature helps you snatch victory from the jaws of defeat, randomly activating on a non-winning spin to hand you symbol transformations, extra wilds, or added symbols.

The Princesses’ powers combine when a white fox scatter appears on the grid, awarding you a free spin. If you manage to clear the grid while this feature is active, you will be launched into the main free spins feature, where you choose one of the princess trio to receive a combination of free spins, and fox scatters with enhancements.

The head of Games at Play’n Go, Charlotte Miliziano, said,

“No one enjoys festive fun more than Play’n GO and we’re excited to add another Christmas game to our portfolio. The original Moon Princess was such a great title but there were many more stories about the princesses waiting to be told. This game continues those stories and packs a real punch too.”

This new title now forms part of Play’n GO’s collection of premium slot titles, following recent releases such as Rich Wild and the Wandering City where the developer’s favourite adventurer embarks on another thrilling journey to a fabled hidden city. His travels take him deep into the Andes mountain range where gold and diamonds are just waiting to be discovered with free spins and multipliers. 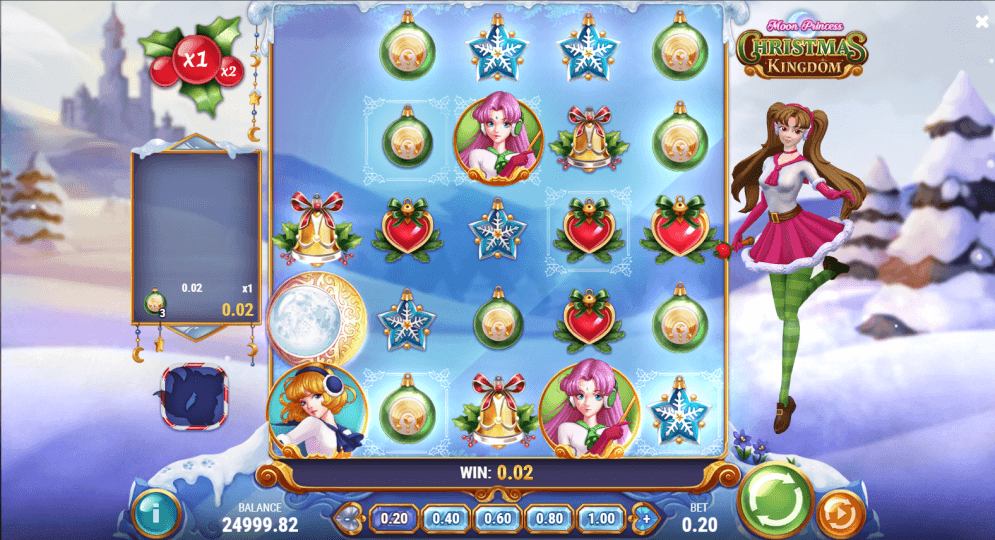