Street Fighter 2: The World Warrior Online Slot by NetEnt is a 5×5 reel medium to high volatility cluster pay slot. This title is a slot recreation of the wildly popular Street Fighter II arcade game that changed the face of gaming in the early ’90s. Even casual gamers will instantly recognize the pixelated characters and 8-bit music which have been faithfully recreated along with gameplay elements from the original game. All of this combines to create a unique experience, melding this classic fighting game with a 5×5 reel slot. 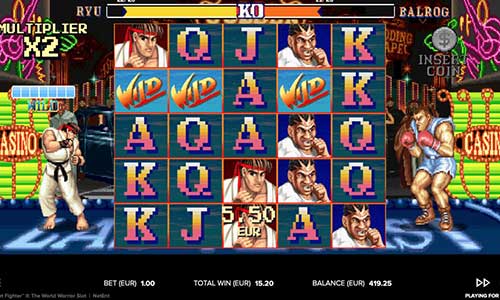 The original character designs, backgrounds and small touches that made Street Fighter II an instant classic have been brought back to create a simultaneously nostalgic and novel experience. The game’s central mechanic is a cluster pays feature with similar elements to rolling reels where winning combinations disappear to make way for new symbols. The gameplay is relatively complex with previously unseen levels of interactivity and you will have free spins, multipliers, accumulating symbol gauges and a bonus game to help you fight your way to the slot’s highest potential across all devices.

Street Fighter II: The World Warrior Slot is understandably one of the most awaited titles in recent history. Its lovingly-executed recreation of an arcade classic that changed the world, combined with innovatively crated features makes this a slot you cannot miss. A lot of thought went into the construction of this title; NetEnt has taken genre-bending to new heights as you will feel like you are playing both a slot and a fighting game. Being able to select classic characters with their unique attributes that can directly affect the outcome of the game means that there is a huge replayability element as you may want to see how well you do with different characters.  The game’s actual winning potential has not yet been disclosed by the developer, but NetEnt is likely to have attached an attractive monetary incentive for players.  Whether you’re a superfan of the Street Fighter games franchise or just casually aware of its existence, this title will likely surprise and enthral you.