Microgaming’s branded catalogue, up until now, has been mostly bereft of music or musician themed slots. The developer seems to have noted the recent success of titles such as Jimi Hendrix by NetEnt and Elvis Lives by WMS, by deciding to throw their hat in the ring with a title that features a much more recent artist than other slots in the same genre.

At 39 years old, Deadmau5 is arguably one of the most prolific electronic music artists alive today, with a 22-year career that has produced 8 studio albums, 9 compilation albums, numerous features with other artists, video game appearances and a net worth of $53 Million.  This multiple award-winning artist is instantly recognizable by the oversized stylized mouse-head mask that he wears in public, giving him an enigmatic persona that has gone a long way to boosting his career.

Typically classified as an ‘ambient’ artist, his synth-infused music spans numerous genres from techno to dubstep to progressive house. Many argue about what his best song ever is, but the general consensus appears to be that “Strobe” from his 2009 album “For lack of a better name” is his most iconic track, a 10-minute epic journey that has been featured on numerous movie soundtracks and broke the top 100 of numerous music charts across the globe at the time of its release. 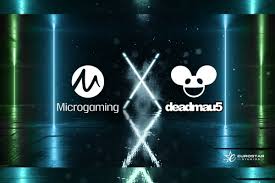 This new slot will be themed around Deadmau5 and his music, specifically his latest North American cube v3 tour. The tour featured eye-boggling laser light shows created by the artist himself, an aesthetic that Microgaming will be seeking to duplicate along with the inclusion of some of his most iconic tracks. Eurostar Studios, a brand new enterprise that produces Microgaming-exclusive content was selected to develop the title which was first announced at ICE London 2020.

No solid release date for this highly-anticipated title has been announced, but Microgaming has revealed that it will be unveiled later in 2020. This cross-pollination of EDM and online slots is an exciting proposition and promises to become an instant fan favourite.

“The addition of deadmau5 to our sizeable branded content offering, which already includes some of the biggest names in entertainment, highlights our commitment to diversifying and innovating across our range. We look forward to launching this unique online slot to operators later this year.”​