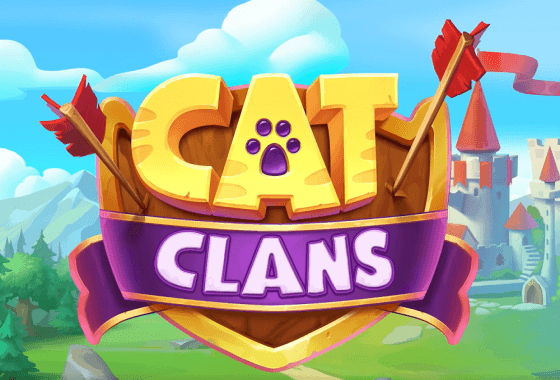 This cleverly named feature activates when you land 3 scatters on the odd-numbered reels. This wasn’t too difficult a feat to manage and I was awarded what seemed like a measly 3 free spins up front, but the feature had surprises in store. I soon discovered that any wilds that landed instantly became sticky for the duration of the feature and reset my free spins count to 3. Things got even more exciting when on each spin, a catapult launched missiles at one of my sticky wilds, boosting its multiplier value. The best part is that while wild multipliers can only reach 5x in the base game, they go all the way up to 9x during free spins.

As I played the game, I noticed something intriguing. Golden paw-print symbols would sometimes appear superimposed over the high-value symbols and then get collected into the waiting treasure chest to the left of the reels. The mystery of the chest was soon revealed as on a random spin, each of the 4 cat symbols was assigned a value of at least 10x my bet and over the following 5 spins, the cat symbol that appeared the most ultimately rewarded me with its assigned value. On one occasion there was a draw between two symbols that had appeared an equal number of times, causing the game to move to a sudden—death style mode, generating extra spins until a winner was decided.

Cat Clans slot is infused with cutesy charm and a high—impact pair of bonus features that deliver amazing potential. I really enjoyed the visual theme, the bright cartoon graphics bring a real sense of fun to the gameplay. The wild multipliers make the base game a worthwhile experience while the paw-print symbols built my anticipation as I waited for the treasure chest to reveal the Clan Battle Bonus. The star of the show for me was the free spins round, which incorporates some “Link & Win” style elements to create a freshly compelling bonus game. The game’s top potential weighs in at an impressive $500 000, more than enough reason for you to leap into battle.