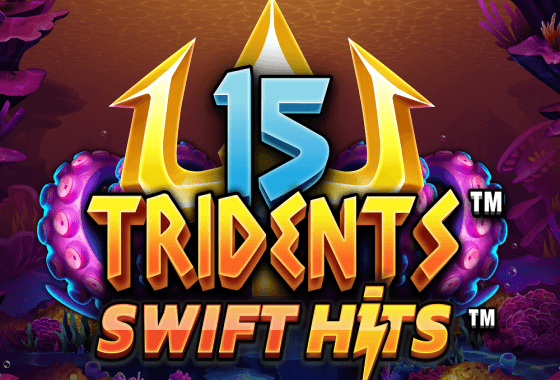 This game has a lot going on in a good way with free spins, modifiers and instant cash prizes that kept me engaged.

These randomly-triggered features did a lot to enhance my gameplay experience and winning potential.

The Poseidon’s Favour feature added extra tridents to the reels to make triggering SwiftHits prizes even easier. Amphitrite’s Blessing saw the goddess of the sea distribute wild symbols across the reels or upgrade the multiplier values of existing wilds. Finally, the Siren’s Call modifier placed a high-value symbol to a reel set, guaranteeing me a win.

When I landed at least 3 of the frankly terrifying Kraken eye scatters, I was launched into the bonus round following a very cool animated sequence. 10, 15, 20 or 25 free spins were on the table if I landed 3, 4, 5 or 6 scatters, respectively. While the feature was active, extra trident and scatter symbols were added to both reel sets and every scatter symbol that appeared would grant me 1 extra free spin each.

The tridents also became sticky, so that meant my SwiftHits prize would accumulate and be paid out to me at the end of the round over and above my ‘regular’ winnings.

15 Tridents slot is an accomplished demonstration of scale, presentation, and technical brilliance. The look and feel of this title are highly polished with bright, vibrant graphics, immersive animations, and impressive double reel sets that pack a lot of potential. This game was consistently action-filled with the modifiers making regular appearances along with the SwiftHits prizes that kept the energy up as I quested to battle the tentacle beast in the bonus round.

The top end of the game is fairly rewarding with a $250 000 maximum win per spin, but I would have needed the maximum number of trident symbols to make an appearance, which felt like a tall order at the best of times. That aside, it was hard to fault Pearfiction’s latest effort which is brimming with originality and excitement.