October sees the unveiling of Microgaming’s latest 5 reel x 15 payline video slot, Titans of the Sun Hyperion. The game is set around Greek Mythology and yields all the usual top quality and entertainment features we have become accustomed to in Microgaming’s staggering stockpile of slot games.

Play Tians of the Sun at Royal Vegas 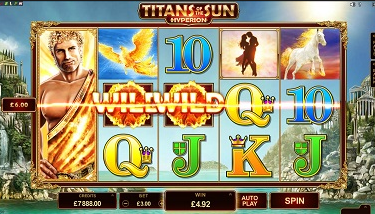 Hyperion, aka the father of Dawn, Sun and Moon plays the central figure in this game against an ancient Greek city backdrop, along with other interesting theme-based characters such as Pheonix, Pegasus and the Sun.

The slot features a free spins bonus round of 15 mini games that get triggered after the appearance of the Embracing Lovers scatter symbols. This bonus round can be retriggered when three or more scatters show up anywhere on the reels. A payout of 5000 x original bet is possible during the free spins round.

The Hyperion symbol is Wild and lands in stacks to transform all adjacent reels into one big symbol which equates to a win. The payout during the base game is 2000 x original bet and wagering denominations start as low as 0.15 up to a max of 15.00 per spin.