Global iGaming leader Microgaming is once again bringing a thrilling selection of titles to your screens this May. Its independent network of developer studios has produced an engaging bouquet of premium slots with fantastical themes and eye-watering jackpots.

Triple Edge Studios integrate the now-iconic Megaways mechanic in Ancient Fortunes: Poseidon Megaways on 25 May. The game features rolling reels, infinite multipliers during free spins, and 117,645 ways to win. Access the Pick Bonus feature with the ‘Collect Pot’ mechanic and claim a jackpot prize. The Greek god of the seas, Poseidon is the main character of the game and his fiery personality is on full display. Take hold of free spins and volcano retriggers to wrest his treasures from the deep.

Rise above the waves with Gold Coin Studio’s Silver Seas on 20 May. This pirate-inspired treasure hunting adventure hands you instant prizes worth up to 2000x your stake when you land special silver coin symbols. Claim up to 30 free spins on the Free Spins Wheel with as much as a 3x multiplier to boot. Pirate gear dominates the reels, so look out for cannons, swords, doubloons, and bottles of rum, to help you grab the booty.

Classic looks with a modern hook is the basis for All41 Studios’ 18 May release, Joyful Joker Megaways. The game’s traditional slot style is completed by classic symbols like fruit, bells, lucky horseshoes, and the joker. The Megaways and Rolling Reels mechanics generate exciting wins while randomly triggered Joker Spins follow after winning spins. Claim multipliers from 2x to 10x from the bonus wheel and fill up your bankroll with unlimited free spins that include an expanding multiplier that gains a boost from every Rolling Reels win.

The motion of the ocean is paramount in Atlantis Rising by SpinPlay Games, arriving on 11 May. Travel to the fantasy submerged city of Atlantis slot, and immerse yourself in a colourful seascape. The game features Rising Wilds, Wild Blasts and free spins to help you win watery treasures. When a compass symbol appears behind a Rising Wild, all the adjacent positions will transform into wilds and create a Wild Blast. Pop a selection of bubbles in the free spins pick bonus game and reveal prizes of between one and five free spins or two to three additional picks.

Take in some Arabian aesthetic with 10,000 Wishes from Alchemy Gaming on 6 May. The game’s Wheel Bonus offers a potential jackpot of up to 10,000x your stake and the appearance of three or more Power Wheel scatter symbols on the reels will activate the Power Spins feature that fills the reels with giant symbols for bigger wins. Power Spins can also be triggered via the Wheel Bonus that can also guarantee you one of four fixed jackpots, the Mini, Minor, Major, and Mega jackpots that pay 15x, 50x, 500x, and 10 you’re your stake, respectively.

Africa calls on 4 May in Serengeti Gold by Just For The Win. The iconic beasts of Africa’s ‘Big Five’ feature ferociously on the reels, so be on the lookout for lions, leopards, rhinos, elephants and water buffalo. The game features Hyperhold respins, Static Jackpots and free spins with added multipliers and if six or more bonus symbols land on the reels, you will claim three Hyperhold respins. During the respins, the triggering symbols will be locked in place, with only new bonus symbols appearing. The symbols hold multipliers from 1x to 20x and jackpot prizes. The Mega jackpot worth 2500x your stake can be claimed by filling all positions.

Take a trip down memory line and find some new surprises with the revamp of Microgaming’s remastered Mega Moolah Goddess on 13 May. The slot transports you to Ancient Egypt and is one of the phenomenal Mega Moolah progressive jackpot titles. Landing three scatters lets you spin the jackpot wheel for a shot at one of four jackpot prizes, namely, the Mini, Minor, Major, and Mega jackpots. Life-changing wins emerge from the Mega jackpot that seeds at $1 million and has created numerous seven and eight-figure winners.

There is even more phenomenal content from Microgaming’s third-party partners. King of Cats by Big Time Gaming releases s on 26 May with an innovative double-game system that has you choose between the Lion game and Puma game. Golden Rock Studios releases Book of Inti on 12 May, an Incan themed title that glorifies the ancient civilisation’s sun god.

The Egyptian-themed Scarab Gold by Inspired arrives on 10 May and features Mystery Boost gameplay mechanics Inspired’s second title for the month is the classic crime caper, Cops ‘n’ Robbers Megaways that debuts on 20 May.

Mobs and mirth are the subject matter of Spanish developer MGA Games’ 24 may release, Risitas en Gansters. The game features the legendary comedian and internet meme, Risitas, who captured the hearts of the world with his infectious laughter. 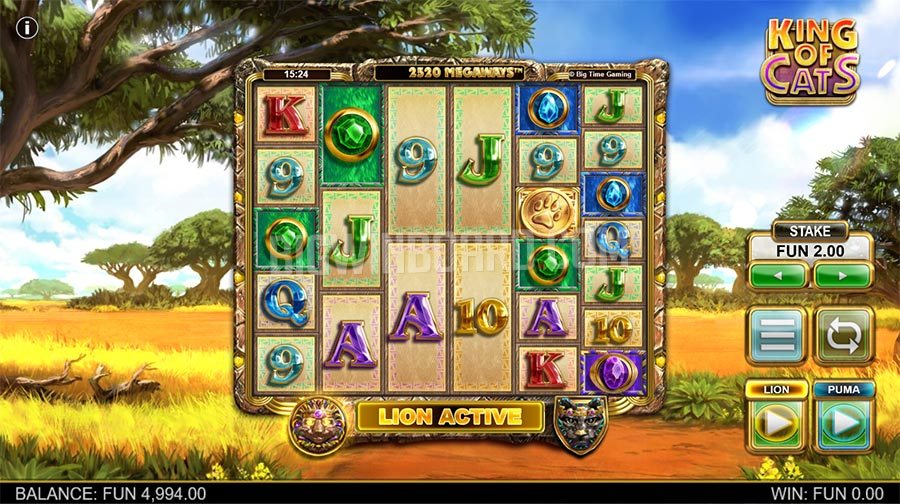