Only a year ago, Leo Vegas and Nolimit collaborated on an iconic game release, which helped to introduce the world to the infamous Tombstone. This game is particularly known for its rewarding, albeit harsh gameplay that is packed with infinite potential that has the potential to test the skills of even the most seasoned players. The two have joined once more and announced their next mega exclusive release by the name of Deadwood. This will act as the unofficial follow up to the hit Tombstone. Nolimit has once again been challenged to pistols at dawn by “King of Casino.”

Nolimit is going to work on the fame which it has garnered for itself by nudging the wild, western theme that has managed to gain streamer and player notoriety. Since then, the brands have released several recognizable titles and smash hits, including Dragon Tribe, Barbarian Fury, Punk Rocker xWays, and so on. However, none of these have managed to hold the air of the unmatched potential, as shown by Tombstone even today. 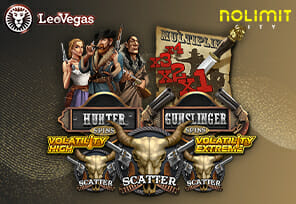 Malcolm Mizzi, Head of Sales at Nolimit City, said: “Having merely just discussed this over informal catchup with our trusted partner LeoVegas, this turned out to be a great one-year reunion following our very first timed exclusive hit release! Hoping that history will repeat itself again and Deadwood will please fans of the original western classic”.

Deadwood is going to reintroduce the very popular xNudge mechanic using a familiar setup. This time the reel set has been increased to 3-4-4-4-3- a combination that offers much more potential giving a max theoretical win outcome of about 13,950x. This time it has also offered players the choice to pick between two separate bonuses. They can choose between the frequent nudging wilds and less volatility, or every landed wild with a sticky multiplier, which might meet for a huge possible amount.​