Quebecers have responded enthusiastically to the province’s Loto-Québec COVID-19 vaccine lottery. At the moment, 644,029 people have registered since the launch of the incentive, according to the Health Ministry.

While registration got off to a slow start due to the site experiencing technical difficulties, the issues were resolved within a day and by that stage, over 360,000 people had already signed up. An official statement from Loto-Québec revealed that its website had seen 20 times its usual traffic.

The lottery is open to any Quebec resident who has received at least one dose of a COVID-19 vaccine and there are four draws with prizes of $150,000 each, held every Friday during August. On September 18, a grand prize of $1 million will be drawn and only the fully vaccinated will be eligible to win.

It appears that the government’s plan for the lottery earlier to encourage more people to get the vaccine has worked well and it is a great help towards the province’s target of having 75 per cent of its eligible population fully immunized against COVID-19 by the end of August.

Quebec’s Institut Nationale de Santé Publique has reported that says that 63.4% of residents over the age of 12 have been adequately vaccinated. 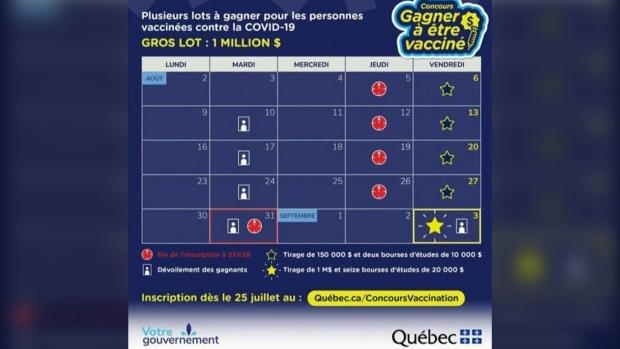