Entertainment Blog6 Holiday-themed Slots That Will Gift You With Giggles

The festive season is a time of global celebration, family gatherings, and releasing the tension built up over the year and what would seasonal festivities be without fun. These 6 slots bring you Xmas experiences full of gags, guffaws, and amusing gameplay. 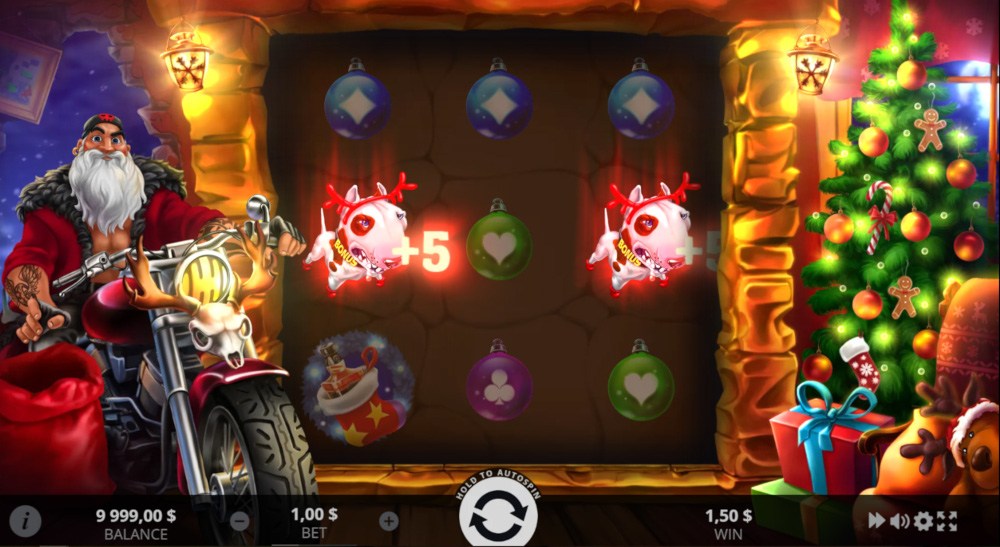 What do you get when you swap out Santa’s sleigh for a big-engined roadhog and Christmas carols for some rocking tunes? Find out in this 3x3 reel, 9 payline title Where traditional Christmas ornaments spin alongside red electric guitars and skull-adorned Zippos as symbols and the wild is a hot babe elf who helps you complete winning combinations in this low volatility title.

Land a winning combination to unlock one of seven bonus modifier gifts that include respins, multiplier wilds, free spins, and extra wilds. The betting options range from $0.10 to $300 so anybody can afford to take a spin and stand a chance of winning the slot’s biggest gift of 100x your stake. 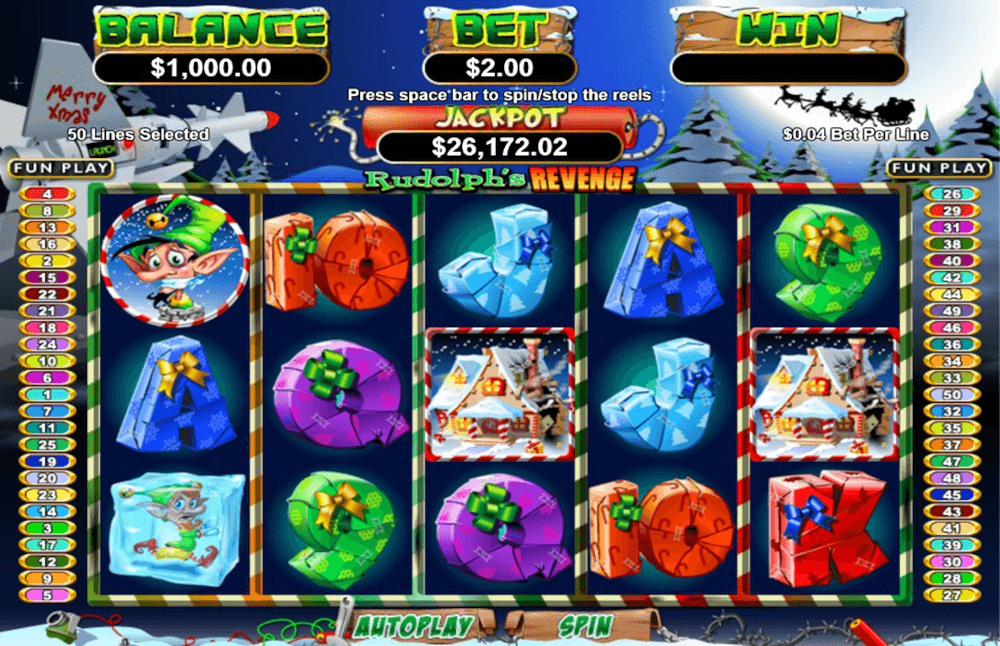 Santa’s sleigh-leading red-nosed reindeer casts off his wholesome image as one too many Christmases of being overworked and underappreciated takes its toll in this zany-action-packed 5-reel 50 payline slot title. A cigar-smoking Rudolph features alongside Santa who has been unceremoniously bound and gagged as well as his traumatized elves as symbols on the reels.

Comedically poorly disguised gift-wrapped bombs are the scatter symbols that trigger the free spins bonus round that comes with a 2x multiplier and extra wilds. Join Rudolph in his rebellion and hop into the sleigh for a chance to win up to 5000 coins on a single spin. 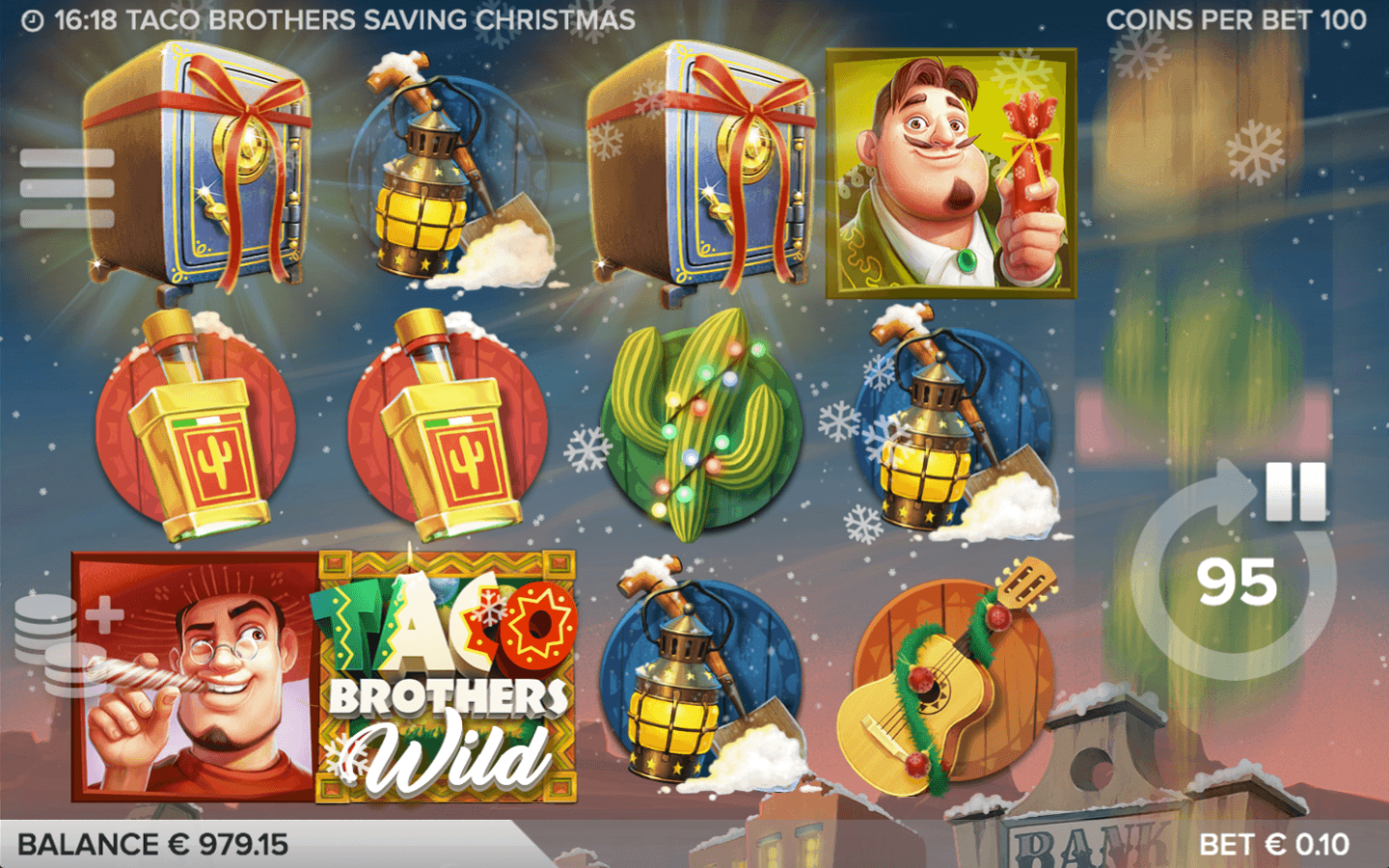 Mexico’s sunny landscape may not be the first thing that comes to mind when you think about Christmas, but a trio of Latino brothers might change your mind. Paso, Pepe, and Pico from the original Taco Brothers slot return in a snow-dusted adventure where they must save as many tacos as they can from the dastardly Captain Diaz. The brothers, their nemesis, and a sassy senorita appear as symbols on the 5x3 reels that feature 243 ways to win.

Special wilds trigger respins when two of them appear on the reels at once and the pivotal safe symbol triggers the Wild Escape Bonus that features walking wilds and up to a 3x multiplier. This medium volatility game offers a friendly RTP of 96.4% with a top winning potential of 1500x your bet. 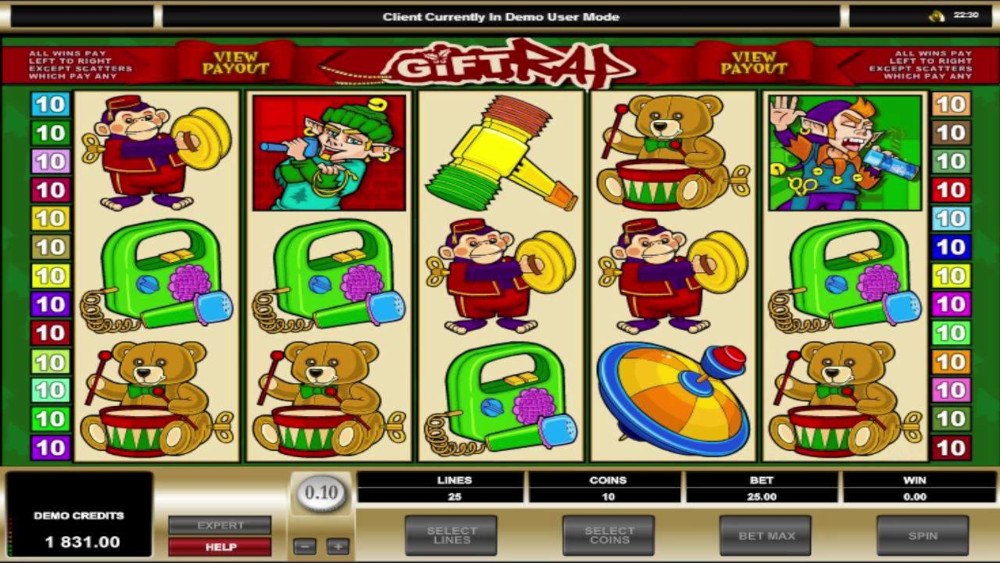 If you like your Christmas with a little hip-hop flavor, this slot has the perfect theme for you to savor. This 2005 5-reel, 25 payline slot may feel a bit dated in the graphics department, but the wins are as fresh as ever. The paytable includes elves spitting out fresh rhymes on microphones alongside toys waiting to be wrapped and some special symbols that boost your winning chances.

Blue spray cans award you scatter wins worth up to 80x your bet while a red bauble is the game’s wild symbol. A snowman jack-in-the-box with sunglasses and a gold chain is the game’s Rappin' Jack Frost symbol that triggers the Gift Rap bonus game where you unwrap gifts to discover amazing prizes. Take on this festive classic to claim up to 32 250 coins in prizes.

We all know the tale of the three little pigs and their ferocious pursuer bent on having them for dinner. In this medium volatility slot game, the story is given a cartoony Christmas twist and plays out on a 5 reel, 25 payline format. A goofy-looking wolf in a Santa hat and vest features as a symbol alongside the trio of pigs looking to escape his clutches.

Land 3 Santa wolf scatters on the reels to set off a crazy pursuit where you get 10 free spins and the hungry canine goes dashing through the snow and smashes through the poor piggies’ houses while a 2x multiplier boosts your wins. Escape the greedy growler’s clutches to take home wins worth up to 1225x your stake from a single spin.

Santa’s elves are normally depicted as a smiling, singing bunch who work in unison to make sure good little children get their gifts, but one of them seems to be a little different. Try to bring some Christmas cheer to Nathan Yell, a red-faced elf who appears to be permanently in the throes of a fit of rage. The mischievous imp stands menacingly to the left of the reels while snowmen, sleighs, and Santas appear as rewarding symbols and Nathan himself acts as the wild.

Land 3 wrapped gift symbols whose colors will determine whether you win cash prizes or the free spins round where multipliers help you reach the game’s top potential of 8000x your bet. See if you can get Nathan to put a smile on his face in this medium volatility, 5x3 reel comedic caper.