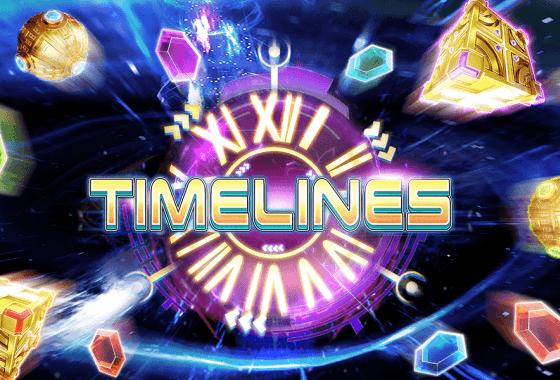 The game’s central mechanic involves some temporal trickery and is accompanied by free spins and the lucrative Epic Strike.

After each spin, a snapshot is taken of the reels and stored in the Timeline above the game grid. Up to 5 snapshots of the past can be stored at any given time. Whenever a timeline symbol appears, up to 15 symbols from past spins are returned to the reels, potentially triggering winning combinations.

Land 3 scatters to gain 10 free spins where timeline symbols appear more frequently. You will also experience an increased frequency of multiplier symbols, but there aren’t any major differences from the base gameplay.

Once you start the game and chose your bet level, you can spin manually or set Autoplay to spin for you up to 100 times. You can also choose to activate sound and quick spins. The game board can look intimidatingly complex at first, but you don’t need to act with the Timeline or the Epic Strike elements to get them to work, so you’ll acclimatise in no time.

Timelines slot isn’t the first title to challenge the passage of time, but it does so with enough originality to make it a compelling play. The slot has a bit of a cheesy sci-fi theme, accompanied by a spacey soundtrack and vibrant, glowing symbols. I enjoyed the look and feel, but some players might feel it’s a bit dated.

The random multipliers added genuine excitement every time they appeared, especially when enough Epic Strike symbols were present to deliver a win.  The Timelines mechanic is the true gem of this game with the timelines symbols sometimes recalling the right combination of symbols to deliver a huge pay-out. The bonus round brings all the elements together and offers you the best chance at gaining the slot’s top prize of $237 500. If you want more reality-bending action, you could go on a rampage with Rhino Rilla Rex or travel to realms unknown in Stellar Portals.