The Alberta provincial government recently revealed the latest $1 million winner of its COVID-19 vaccine lottery. The lucky winner, Amie Gee, had her name drawn from over 1.85 million entries and claimed the second of three million-dollar draws from the Open for Summer Lottery.

The province also advised that 42 other winners had secured travel prizes that were donated by Air Canada, WestJet, the Rocky Mountaineer, and Juniper Hotel.

In an official press release, Premier Jason Kenney reacted to the news, saying,

“Congratulations to Amie, and all of the other winners, I encourage Albertans who haven’t gotten their second dose to do so as soon as possible to qualify for the final draw at the end of September.”

The prize announcement was made against the backdrop of a province under the shadow of its fourth wave of the pandemic, with rising COVID-19 infections and a spike in hospitalizations.

In a recent official statement, Alberta Health advised it had recorded 1,339 new COVID-19 cases over 24 hours on 2 August, the highest one-day total recorded by the province to date since mid-May.

The government also put out a video of Kenney congratulating Gee, where he asked,

“You know Amie, one of the challenges we have with the vaccine program amongst younger adults. What would you say to your peers in your kind of age group about the importance of getting vaccinated?”

Gee replied by saying that she believes “it’s not just about us” and that getting vaccinated is vital to safeguard other members of the community.

The video continued with Kenney stating,

“Unfortunately we’re seeing more COVID patients coming back to the hospitals with this Delta variant but they are overwhelmingly over 90 per cent of people who are not vaccinated. And a lot of them are in a young age group, between 20 and 40, 20 and 50.”

Kenney added that he would appreciate it if Gee could provide any encouragement to younger Albertans who have not been vaccinated yet.

“Yeah, as many people as can get it, the better off we’ll be (and) the sooner we’ll be out of this,” she responded.

When questioned, Gee added that she had yet to decide on her plans for the money but that she hopes she can put it to good use and “bring a little joy.”

All adult Alberta residents who have received two doses of an approved COVID-19 vaccine are qualified to be entered into a draw for the Open for Summer Lottery initiative. Only one entry is needed to be eligible for all the draws, and the government has stipulated that entrants “must be able to provide proof you have received your second dose to win the September draw.”

Registration closes on September 23 at 11:59 p.m. so any Alberta resident interested in making a cool million should get their jabs as soon as possible. 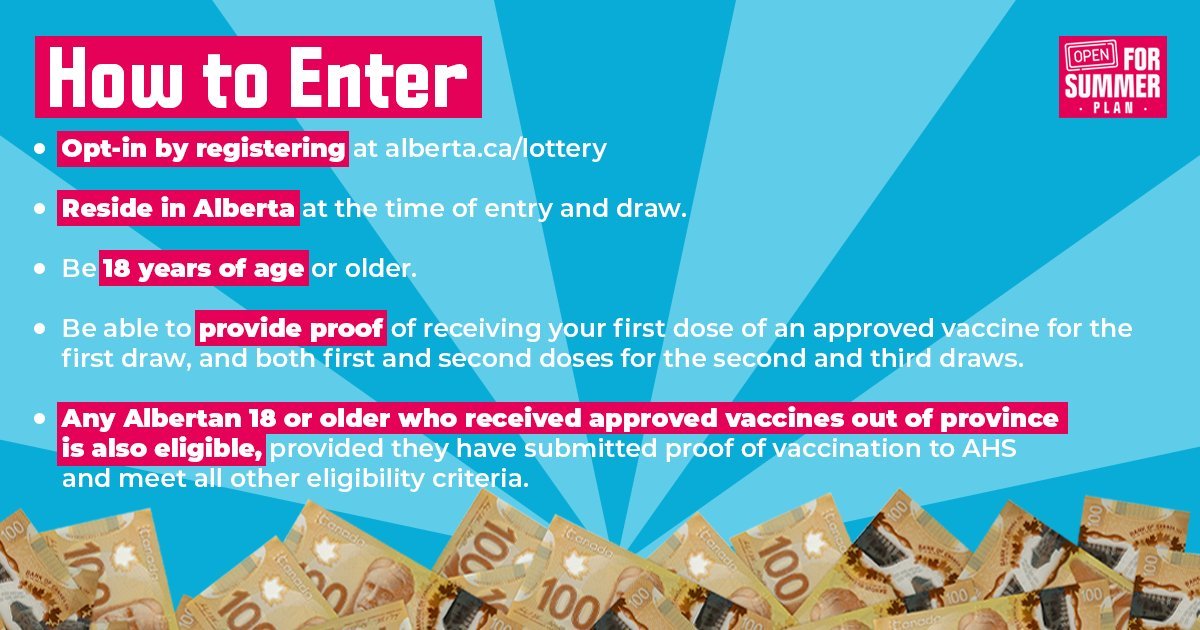