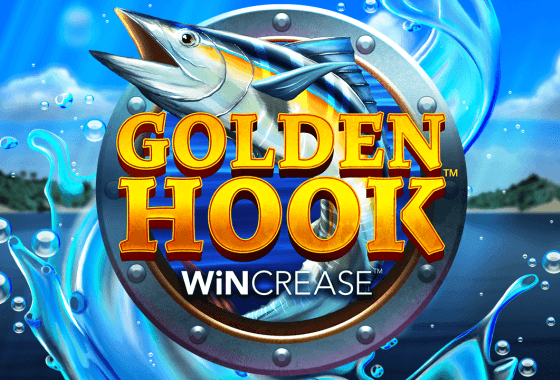 As I launched the game, I realised that the unusual gameplay means there was no traditional paytable in sight. When I hit the spin button at the centre of a ship’s wheel, my fishing line was launched into the water and if I didn’t get a bite, the spin would end, but when I did get something on the line, the real action kicked off. The needle on a meter above the spin button shot into the green zone and the longer I held on, the more the value of my potential win increased. However, this is a game of timing and luck, so holding on too long without reeling in my catch meant I lost the total amount, but when I got it right and hit the collect button in time, I received my prize.

Multipliers between 2x and 10x would also occasionally pop up on the surface of the water, applying to the win that I managed to land that round.

Golden Hook isn’t your traditional slot title, but the game’s sole bonus feature does bear some resemblance to free spins.

Landing a golden fish took me beneath the surface of the water where various fish swam across the screen and crabs with multiplier values attached to them scuttled across the seafloor. The game automatically cast my line for me in a time-limited bonus round where I could land some high value wins. The feature ended when the time ran out or when I hooked a 2x multiplier crab.

Much like The Incredible Balloon Machine, Golden Hook slot offers mould-breaking gameplay that may be an acquired taste for some. Crazy Tooth Studio is my go-to for weird and wonderful slot titles that defy convention and deliver unique experiences. This slot is no exception, taking the Wincrease burst mechanic and applying it to an angling adventure where I managed to land some huge wins on the spins where I was bold enough to hold out until the very last moment before hitting ‘collect’.

The game looks good and the transition from above the water to below for the bonus game offers a refreshing change of scene. While I am a big fan of this type of game and I enjoyed this one, in particular, the novelty value can’t compensate for the periods where you don’t land any wins, meaning the base game can be frustratingly dull at times. This coupled with the relatively low maximum potential of $123 280 gives this title a narrow range of appeal, but those who do appreciate it are in for a lot of fun.