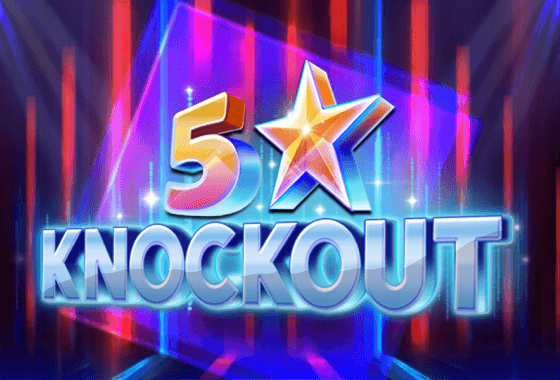 Collecting stars is central to taking advantage of the game’s main bonus feature, although having no stars in hand can also work to your advantage.

This was a simple feature that rewarded each of my wins with a respin, and if the respin itself resulted in another win, the process, kept repeating until no more winning combinations appeared.

As star symbols appeared on the reels, they were collected in the Award Boards below the reels. The boards displayed the game’s symbols with each one having 5 gaps for 5 stars to fill up.

At one point I found my Award Boards empty and the game randomly triggered the Bonus Stars feature that allocated a random number of stars to a selected symbol. When a symbol’s star meter was filled, I received 5 free spins and any meters that got filled while the feature was active awarded me an additional 2 free spins each. The ‘Knockout” in this slot’s title refers to the fact that during free spins, when a symbol’s meter was filled up, all instances of it disappeared and I gained a 5x multiplier, giving me a welcome winning boost.

5 star Knockout is a title with some promise and an unfinished feel. The slot’s generic theme didn’t do much for me, although fans of the classic casino aesthetic will probably feel right at home with this game. The features were more involved than I expected, with the Win Spins creating chains of wins and the Stars ultimately representing my best chance to achieve the slot’s top potential of $225 000. This slot certainly wasn’t my cup of tea, but it may find a home with players who enjoy the classic theme.